Apple has a long history of censorship when it comes to information about Tibet. In 2009, it was revealed that several apps related to the Dalai Lama were not available in the China App Store. The developers of these apps were not notified that their apps were removed. When confronted with these instances of censorship, an Apple spokesperson simply said that the company “continues to comply with local laws”.
In December, 2017, at a conference in China, when asked about working with the Chinese authorities to censor the Apple App Store, Tim Cook proclaimed:

In the ten years since Apple was first criticized for working with the Chinese authorities to silence already marginalized voices, what has changed? Apple continues to strictly follow the censorship orders of the Chinese authorities. When does Tim Cook expects that his company will help to bring about positive change in China?

Based on data generated from https://applecensorship.com, Apple has now censored 29 popular Tibetan mobile applications in the China App Store. Tibetan-themed apps dealing with news, religious study, tourism, and even games are being censored by Apple. A full list of the censored apps appear below.

“Apple’s leadership hides behind the excuse that they censor apps to comply with vague ‘Chinese local laws’, but their actions lack any measure of transparency. By removing Tibetan and numerous other apps from the China App Store, Apple is hindering Tibetans’ ability to access information and freely express themselves, a basic human right under International law,” said Dorjee Phuntsok, Response Coordinator for TibCERT (Tibetan Computer Emergency Readiness Team), who conducted the analysis of the blocked Tibetan apps in collaboration with GreatFire.

In January, 2019 GreatFire launched applecensorship.com. At that time, GreatFire co-founder Martin Johnson noted: “Apple does not share information about App Store censorship in their transparency report – this project forces the transparency. Tim Cook can say whatever he wants about what Apple is or is not doing in China, but applecensorship.com provides the raw data needed to actually see how Apple practices censorship”.

Analysis of the iOS apps censored by Apple in China

There are many apps either made by Tibetans or for Tibetans and Apple is censoring many of these apps in the China App Store. It is important to understand how and why certain apps are blocked and the rationale behind these decisions. To understand this, TibCERT (Tibetan Emergency Readiness Team) conducted an analysis of Tibetan apps being censored in the Chinese App Store. The research was conducted using keyboards to search for Tibetan apps and then using the app censorship platform provided by GreatFire. 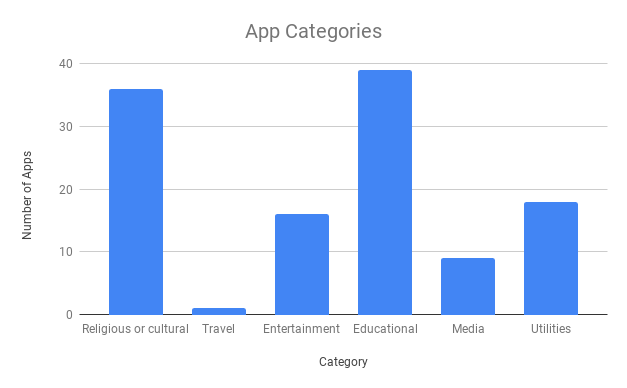 All 119 apps were tested on  https://applecensorship.com/ to see if they are blocked/censored in China. Of the 119 apps, it has been determined that 29 iOS apps have been censored in China. Among the censored apps, 7 are “Religious or Cultural” in nature and 5 are “Media/Political”.

By looking at which apps have been censored, it is possible to identify some of the censorship criteria. If the name of the app contains the Dalai Lama’s name then the app is likely to be censored. All media apps are censored. The only game that has been censored prominently features the Tibetan National Flag in its logo.

Given Apple’s lack of transparency about which apps it censors, many developers may be unaware that their app is blocked from the China App Store. However, one Tibetan App developer, who wishes to remain anonymous, reported: “I am not allowed to publish apps when I select China. A message appears saying that I have violated the cyber rules of the country (China)”. This vague message offers no explanation for how the developer’s app violates cyber rules, and what those rules are, and offers no option for redress. Given the overall lack of transparency about its censorship policies, it is unclear how many apps Apple prevents from being published in the first place.

Some Tibetan Buddhist-themed apps are censored while others are not, and the reasons for these discrepancies are unclear. TibCERT continues to conduct more analysis to understand why certain apps are available and why certain apps are banned. In some cases, apps may be available in the China App Store (VOA Tibetan, for example), but the websites that they rely on to feed information to the apps are blocked in China, rendering the apps useless. The methodology that TibCERT used to find Tibetan apps was through keyword search. However, this methodology has its own limitations and TibCERT is continuing to explore other ways to expand its research in understanding how Apple censors apps related to Tibet.

Tibetan Apps that are being censored by Apple :

The research report conducted by TibCERT on Apple App Censorship in Tibet/China which TibCERT collaborated with GreatFire. The original report was published in TibCERT blog on 31 May 2019.