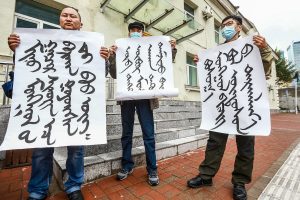 Mongolians protest on August 31, 2020, at the Ministry of Foreign Affairs in Ulaanbaatar, the capital of Mongolia, against China’s plan to introduce Mandarin-only classes at schools in the neighboring Chinese province of Inner Mongolia. Photo: AFP / Byambasuren Byamba-Ochir

For the past few years, a series of notices and new laws have created an environment where Tibetan children are prevented from learning the Tibetan language. For instance, in the 14th Five-Year Plan of the Chinese government, which was adopted on March 11 by the National People’s Congress (NPC), Article XLIII says:

The above plan indicates that the Chinese government intends to intensify and popularize the “national common language” (Mandarin) and the standard Chinese writing system. Through this, the party-state has made it clear that it intends to eliminate the source of social instability by eradicating the sense of Tibetan identity among the younger generations through intensive indoctrination and propaganda.

According to Radio Free Asia (RFA), a notice was last month issued to all the districts and cities of Qinghai province, known to Tibetans as the Tsongon region of their historical land, forbidding individuals and organizations from holding any informal classes to teach the Tibetan language during the winter holidays.

According to the RFA source, who spoke on the condition of anonymity, the notice roughly says: “No individual or organization is allowed to hold informal classes or workshops to teach the Tibetan language during the winter holidays when the schools are closed.”

A few months before, the Chinese authorities in Tsongon closed down a few private schools. Darlag county in Golog Tibetan Autonomous Prefecture was closed without any explanation on July 8. With different notices and decrees, the Chinese government has started a region-wide clampdown on schools promoting Tibetan culture and offering instruction in the Tibetan language.

Similarly, in October, Gaden Rabten Namgyaling, a school administered by Drago Monastery in Karze, Sichuan province, was given only three days’ notice to demolish the school or the local Chinese authorities would do so and confiscate the building materials as well.

A 52-second video, probably shot through mobile phone, uploaded to Radio Free Asia’s YouTube channel, shows dozens of high-powered cranes and trucks dismantling the school in the presence of local Chinese leaders. Officials had accused the monastery of violating the state laws on land use.

Already, the majority of official documents, notices, correspondence, and letters of certification are written in Chinese. But the young remain worried about their mother tongue and maintain that the Tibetan language is capable of conveying all the contents that all other languages are capable of expressing.

In 2010, because of hostile education and language policies, around 5,000 to 7,000 Tibetan students participated in a peaceful march in Togren, Tsongon. If the Chinese government continues to impose stringent policies, this will further marginalize the Tibetan language and may generate resentment among the Tibetan people.

Last year in Inner Mongolia, parents and students staged a boycott against the new bilingual education policy that requires all the schools to use Chinese in textbooks of primary and middle schools, thus replacing the current Mongolian textbooks.

Since the ascent of Xi Jinping to the Chinese presidency, the crackdowns on Tibet, East Turkestan and Inner Mongolia have intensified. Now the Communist Party of China is on the way to instrumentalizing the constitution to exclude the enshrined ethnic language rights.

According to Yang Haiying, a cultural anthropologist and professor at Shizuoka University in Japan, the CPC “is now amending local regulations, and the next step is to change the constitution, getting rid of the language that all ethnic groups have the right to use their own language.” He further suspects that soon, “All the autonomous regions will be changed to provinces as well.”

Last month the language-learning app Talkmate and the online video streaming site Bilibili appeared to remove the Tibetan and Uighur languages from their platforms as a result of government policy.

The discriminative education and language policies imposed by the Chinese authorities inside Tibet are increasing day by day, thus leading to further Sinicization. With the recent developments in Tibet, in the days to come, this author estimates that soon there will further crackdowns on online teaching of the Tibetan language on social media.