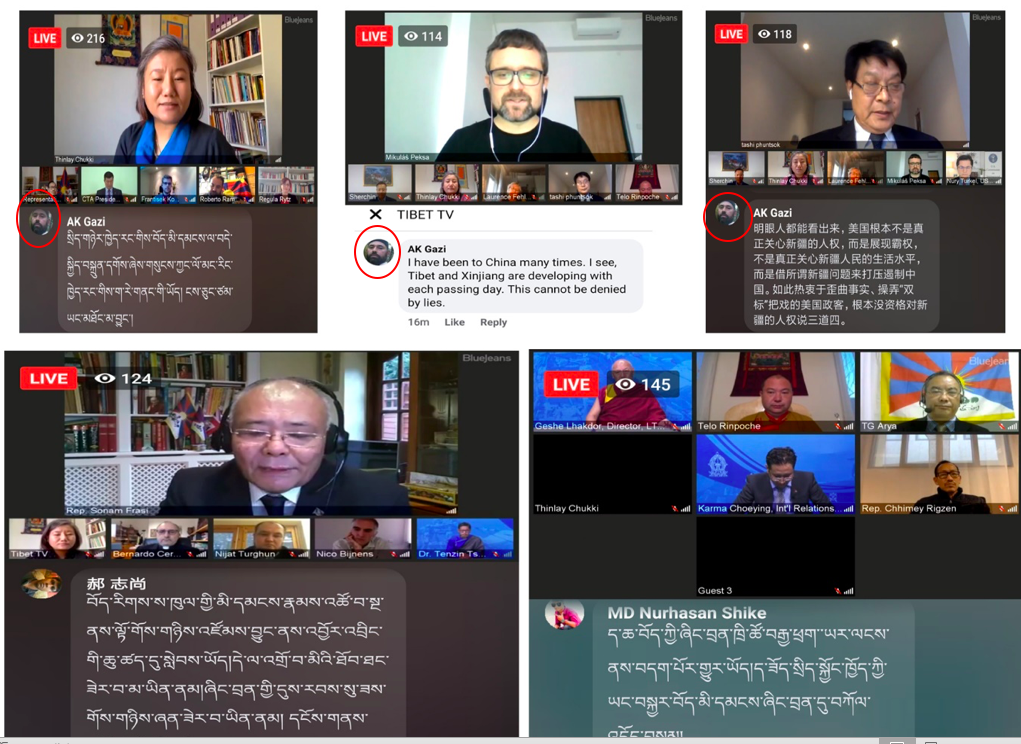 The Chinese government has one of the most comprehensive propaganda networks in the world, aggressively working to disseminate misinformation and influence how it is viewed from outside and within its borders. The state sponsored troll machinery, notoriously known as the ‘50 cent army,’ worked overtime earlier this month to disrupt the, the Central Tibetan Administration organized Geneva Forum 2020.

The annual Geneva Forum this year was held virtually from 9 to 13th November 2020 with live streaming on social media network. The Forum deliberated on this year’s central theme “China’s Policy on Freedom of Religion: Global Impact” with sessions ondeclining freedom of religion in regions under China leading to persecution of various religious groups including Tibetan Buddhists, Uyghur Muslims, Christians, and Falun Gong practitioners.

Throughout the five days forum, the Chinese Communist Party (CCP) rigorously pushed its propaganda and incessantly disseminated misinformation and aimed at distracting the organisers trying to collect questions from viewer in the comments section of the live stream.

The government-employed troll army proficient in multiple languages, reportedly numbering from five hundred thousand to two million, works to post comments on the internet, praising the image and integrity of the CCP and attack its critics with the intention of fabricating facts as well as removing content deemed as unfavourable. They are specifically employed across multiple government propaganda departments, private co-operations, and news outlets and according to the Washing Post, these government employees have been generating about 448 million comments annually since 2012.

During the pandemic lockdown and subsequent increase in online and virtual activities all over the world, it has been rumoured that the 50 Cent Army has been given a pay raise to 70 cent per word that they write or delete. Their primary purpose supposedly being to cover up any posts that run counter to the state narrative and bolster Xi Jinping’s image as the saviour of the country. These paid commentators actively engage with global social media forums like Twitter, Instagram, Facebook by mobilizing disinformation and countering online criticisms against CCP within China and abroad.

Thinlay Chukki, Special Appointee for Human Rights at the Tibet Bureau in Geneva and the organiser of the Forum said, “The Geneva Forum has been an important international platform to deliberate and report on human rights violations being carried out by the Chinese Communist Party regime.  It is building up a strong network and a common converging space for human rights advocates, activists, diplomats, academicians, politicians and so on.”

Speaking about incessant trolling during the Forum, she noted, “the 50 Cent Army’s attack on the Facebook live broadcast of the event is a recognition of this fact and we take it as an appreciation for the important work we are doing through this forum. We hope to come back stronger and bring together a much diverse group in future.”

During the Geneva Forum live broadcast on Facebook, paid CCP commentators wrote offensive comments about the Forum, the participants, and human right activists. They plotted to create a false narrative on CCP’s development in Tibet and East Turkestan regions and tried to distract the attention of the organiser and viewers. During the course of the Forum, thousands of comments were posted pushing CCP’s propaganda and official narrative.

The screenshot photo (See fig no: 1) shows unambiguous first-hand evidence about the existence of the 50 Cent Army, predominantly commenting in three different languages – Tibetan, English and Mandarin. For instance, the Facebook profile by the name ‘AK Gazi’ actively participated during the entire Geneva Forum and posted assertions about the CCP’s alleged development in Tibet and East Turkistan in multiple languages.

Similarly, another (see fig no: 2) fake Facebook ID user, ‘MD Mosarep’ commented both in English and Tibetan languages during the Forum. While commenting in English, the user identified himself as a person of colour and tried to divert the discussions to black rights movement. On the other hand, while posting in Tibetan language comment, the same Facebook ID identified himself as a Tibetan and tried to spin the narrative to capitalism vs communism.

Analysing the flow of comments during the Forum, it is evident that the trolls typically avoid arguments or direct discussions, which is indicative of their lack of knowledge and information on the issues being discussed. Instead they focus on posting CCP’s deceptive narratives in multiple languages filled with propaganda or baseless allegations.

Studying the usage of Tibetan language in the comments, it could be assumed that the troll army also employs Tibetans from Tibet or Chinese netizens well versed in Tibetan language.

Dr Tenzin Tsultrim, Visiting Research Fellow at the Tibet Policy Institute, and one of the panellists while reacting to the orchestrated online activities noted, “From the barrage of comments during Geneva Tibet Forum 2020 Facebook live streaming, one may conclude with certainty about the CCP’s increasing prowess in disrupting anything going against their state-sponsored narrative even beyond their territorial regime. This incident also highlights CCP’s insecurities about their alleged legitimacy beyond its geographical territory.”

Online trolling and posting of divisive comments using fake IDs by the 50 Cent Army is not a new phenomenon within the Tibetan community. The President of the Central Tibetan Administration, Dr Lobsang Sangay has urged Tibetans to be cautious about the increasing number of fake IDs, and expressed concerns over their involvement in spreading misinformation especially in light of the upcoming Tibetan general elections.

Based on China’s troll army’s nefarious online activities during the Geneva Forum and the ongoing Covid-19 information war, it can be safely concluded that the CCP has invested heavily in its cyberspace propaganda machinery to make it more subtle and sophisticated than before. The large deployment and rumoured pay raise of its 50 Cent Army is a clear sign of CCP’s growing insecurities over its failed policies inside Tibet and the violation of basic human rights of its people. The world must realise that CCP’s propaganda machinery and troll army spewing lies, misinformation, and censorship are clear threats to the era of digital revolution and weakens the core foundations of free and fair information.