Tibet is rich in natural resources including rare earths, which many fear Beijing plans to exploit without protecting the environment 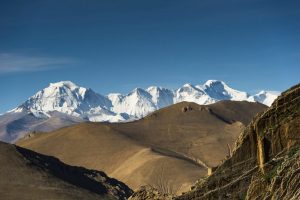 The Tibetan Plateau has been called the world’s ‘Third Pole.’ Photo: AFP

Before the invasion of Tibet by the People’s Republic of China (PRC), mining was rarely conducted in that region. Within the Tibetan cultural sphere, mining and ground disturbance are often said to remove “the bcud [nutrition or essence] of the earth, of which minerals are [a] primary form.”

During the Cultural Revolutions, Tibetan people were sent to Jang Tsala Karpo, a borax mine in the high-altitude Jangtang region of northern Tibet (Nagchu). Some mining for chromium was also done using Tibetan prisoners, many of whom were worked or starved to death. In short, after the invasion, China’s mining continued throughout Tibet.

Gabriel Lafitte, one of the foremost environmentalists and researchers on mining in Tibet, has divided China’s exploitation of Tibetan natural resources into four periods.

The first stage was that of the 1950s, 1960s and 1970s when the Tsaidam Basin became the site of one of the largest exploitations of minerals such as chromium and bauxite.

The second stage was that of the 1980s and 1990s, characterized by the damaging gold rush mostly involving small-scale private individuals in the rivers of Kham and Amdo, two of the traditional provinces of Tibet.

The third stage of China’s exploitation of Tibet’s natural resources began with the large-scale mining by government organizations such as the People’s Armed Police or by state-owned enterprises.

The fourth stage of natural-resource mining in Tibet was for minerals like copper, which requires a large amount of electricity and a good network of roads.

For many, Tibet is popularly known as the “Third Pole” and the “water tower of Asia,” supplying fresh water to the lower riparian countries. Other than that, Tibet is also rich in natural mineral resources.

More than 126 kinds of mineral resources have been found in Tibet, the quality of which is among the best in the world.

According to Zhang Hongtao, vice-director of the China Geological Survey Bureau, the Tibetan Plateau has reserves of 30 million to 40 million tons of copper, 40 million tons of lead and zinc, and billions of tons of iron. Because of the reckless mining by the Chinese government, the richness of the plateau in natural resources became a curse for the Tibetan people and the ecosystem.

Under the 14th Five-Year Plan, the Chinese government intends to “strengthen the construction of coal reserve capacity. We will improve the energy risk emergency management and control system, strengthen power supply guarantees for key cities and users, and strengthen the security protection of important energy facilities and energy networks.”

Not only that, but the party-state also plans to “strengthen the planning and control of strategic mineral resources, improve reserve security capabilities, and implement a new round of breakthrough strategic initiatives for prospecting.”

Last month, the National Development and Reform Commission revealed that China will step up exploration for strategic mineral resources including petroleum, natural gas, copper, chromium, tungsten, rare earths and others during 2021-2025.

Many rare-earth minerals are found in Tibet. Currently, the demand for batteries for electric vehicles is soaring in the world, leading to further soaring prices for raw materials. Hence the demand for lithium will increase, and lithium reserves are abundent in Tibet. For instance, the production of lithium carbonate from Tso-Ngon (Qinghai) Lake has doubled this year.

Hence, judging from the above developments, in the future, there is a possibility of extensive mining across Tibet.

Furthermore, according to the National Development and Reform Commission’s “Action Plan for Carbon Dioxide Peaking Before 2030,” the party-state plans to develop “multimodal transportation with railway and waterway transportation as the mainstay.”

“We will continue to construct special railway lines for industrial and mining enterprises, ports, and logistic parks, and accelerate the development of high-level inland waterway networks to facilitate a shift in bulk cargo transportation and mid-long distance freight transportation from highways to railways and waterways.”

In the past, mining has led to the relocation of a record number of Tibetan pastoralists. The impacts of excessive mining on Tibet’s environment are manifold. For instance, mining causes serious destruction of the surface morphology and soil structures of lands and also leads to decreasing soil enzyme activities.

Mining operations also increase the release of arsenic, which is a potential threat to water quality. Since Tibet is the primary source of Asia’s major rivers, excessive mining across the region may affect the quality of water flowing toward the low riparian countries.

Despite more than 20 large-scale mining-related protests being reported from 2009 to 2014, the Chinese government has continued its mining operations across Tibet. China’s mining has created irreversible damage to the land, water, and air ecosystem.

In May 2013, a mass gathering of around 5,000 Tibetans protested against a Chinese company to stop a mining project near the sacred Ngalha Dzamba Mountain in Driru county. Again in 2016, China started a gold mining operation at Gong-Ngon La Ri (sacred mountain) in Sangchu county in eastern Tibet.

The Chinese government always claims that the mining industry is operated to develop the socio-economic conditions of the Tibetan people, but instead, it has led to environmental damage and protests across Tibet.