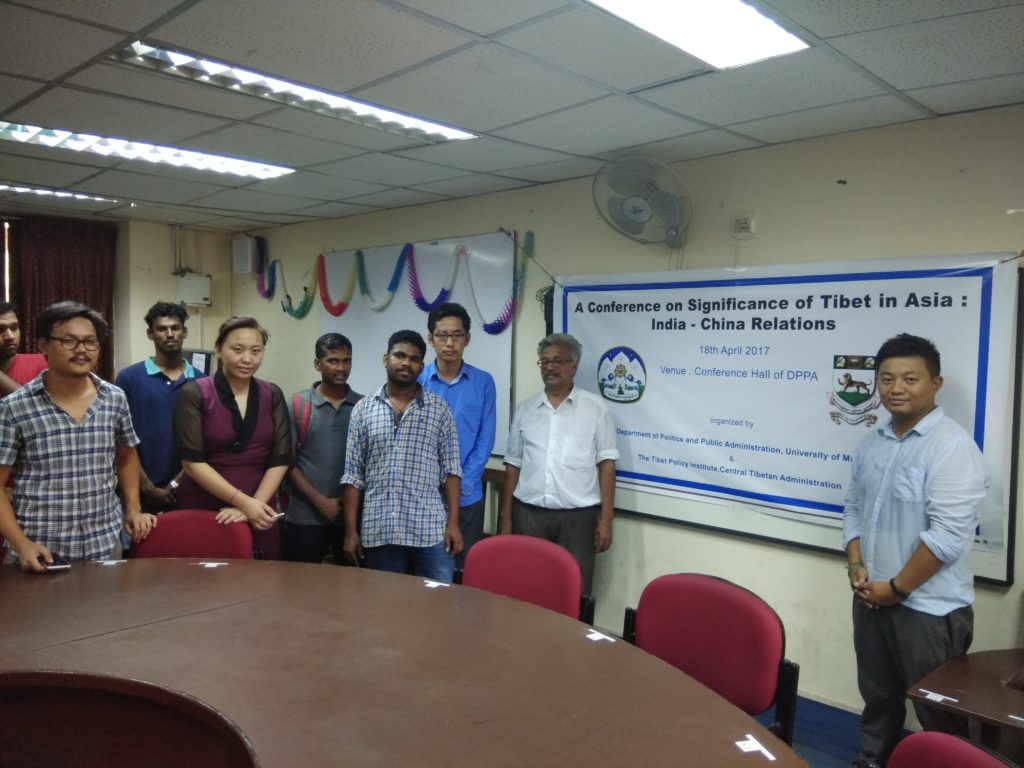 After successful outreach program in November 2016, with think tanks and research centers in Chennai, Tamil Nadu, this is the first joint conference organized by the Department of Politics and Public Administration, Madras University and the Tibet Policy Institute, Central Tibetan Administration. The keynote speakers were Commodore R.S. Vasan (IN Retd) Director of the Chennai Centre for China Studies and Prof. Sonika Gupta, Department of Humanities and Social Sciences, IIT Madras.

The keynote address was given by Commodore, R.S. Vasan (IN Retd.), Director of the Chennai Centre for China Studies. In his address, Commodore R.S. Vasan emphasized on the importance of building nation through research. Additionally, he spoke on the significance of the Tibet issue, not just vis-à-vis India-China relations but in the context of world politics at large.

The first session of the conference was moderated by Prof. Ramu Manivannan, Head of the Department of Politics and Public Administration, University of Madras. In the first session, Prof. Sonika Gupta, Department of Humanities and Social Sciences, IIT Madras gave a detailed presentation on ‘Tibet In Exile: Narratives of Democracy, Contestation and Struggle.’  She stressed on the importance of research on exile Tibetan communities, not just as leverage between India and China, but critically, the importance of exile political dynamism like democratization process and its challenges. How that would bear impact on the political struggle. This was followed by a presentation given by Dr. Tenzin Tsultrim, Research Fellow at the Tibet Policy Institute, on the ‘Significance of military development in Tibet.’

The second session was moderated by Prof. Sonika Gupta, Department of Humanities and Social Sciences, IIT Madras. In the second session, three research fellows from the Tibet Policy Institute gave presentations on different topics. Dr. Rinzin Dorjee, Research Fellow at the TPI, spoke on ‘China’s Urbancide in Tibet’. In his presentation, he revealed the real intention behind the current ongoing urbanization in Tibet and its negative impact on Tibetan culture and identity. He further highlighted the Chinese government’s policy of state territorialisation through urbanization of Tibetan Plateau. Mr. Tenzin Dalha, Research Fellow at the TPI, in his presentation on ‘Chinese censorship versus Tibetan Activism in Social Media’ dealt on the emerging trends of Tibetan activism through social media in Tibet and restrictions imposed by Chinese government. Ms. Tenzin Palden, Research Fellow at the TPI, spoke on the ‘Implementation of Environmental Law in Tibet’. The last session ended with Q&A.