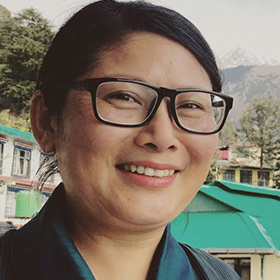 Tsering Yangkey, born on 15 June 1971, hails from Mundgod Tibetan Settlement, south India. She first joined the Central Tibetan Administration as Under Secretary in the Department of Religion and Culture on 25 April 1996.

On 11 February 1999, she was promoted to Deputy Secretary of the Department of Religion and Culture.

On 15 October 2014, she was appointed as Additional Secretary of the Tibet Policy Institute.

On 1 August 2016, she was appointed as Additional Secretary of the Department of Information and International Relations.

From 6 October this year, she was promoted to Secretary and joined the Tibet Policy Institute as the Director on November 01, 2018.

Instead of policy correction, China issues a white paper on Tibet