India-US Tibet Policy Is Evolving, and Blinken’s Meet Is Proof

Modi’s call to the Dalai Lama on his birthday was also seen by many as a departure from his earlier approach. 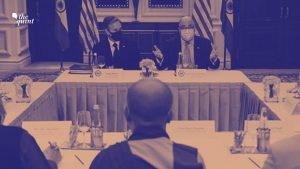 The recent landmark meeting of the US Secretary of the State, Antony Blinken, with the representative of the Bureau of His Holiness the Dalai Lama, New Delhi, Ngodup Dongchung, and also with Geshe Dorji Damdul, the Director of the Tibet House, Delhi, has restrengthened Tibetans’ trust in the continued support from the United States. Geshe was reportedly also invited to a separate meeting chaired by Ambassador Atul Keshap, Charge d’ Affairs, US Embassy, New Delhi.

In the past, the first and open official international support for the Tibetan political cause came in 1987, when members of the US Congress attached a resolution to a State Department authorisation Bill condemning the deplorable human rights violations in Tibet. It was later adopted by the House of Representatives on June 18, 1987.

In 2020, the US Congress passed the Tibetan Policy and Support Act, which has further strengthened the US commitment towards the cause of Tibet. The meetings also conveyed a strong message to China about the US’s commitment to democratic values and its call for the rights of Tibetans to choose the successor to the Dalai Lama. In the joint press conference by the US and India, the camaraderie between the two Ministers was conspicuous. Beyond the press conference, too, the relationship between India and the US is getting strengthened since the conclusion of Next Steps in Strategic Partnership (NSSP) in 2005. For the past few years, the relationship between the US and India has been strengthening.

Chinese Transgressions Amid A Pandemic

All this occurred as the world was still grappling to fight the COVID-19 pandemic. The crisis turned from an epidemic into a pandemic because of China’s withholding of vital information on the virus and its iron-grip control over the free and fair flow of information within the country. During the press conference, Blinken also emphasised the importance of the cooperation between the US and India in containing the spread of the pandemic and the need for stronger global health security. At the same time, he highlighted the vitality of the relationship between the two biggest democratic countries in the world and their commitment towards democratic values. The support for the cause of Tibet also confirms their shared values.

Amidst the COVID-19 pandemic, when the world’s attention was on containing the virus, People’s Liberation Army (PLA) soldiers started encroaching into India’s territory from the Chinese-occupied territory in Tibet. For centuries, Tibet has been an ideal and natural neighbour and the Himalayas saw a constant flow of Tibetan scholars, pandits and yogis visiting the great Indian viharas of Nalanda, Odantapuri and Vikramsila. However, with the enforced disappearance of this friendly neighbour, unlike in the past, traders and scholars are now replaced by the gun-toting PLA on the soil of Tibet. These days, the intensification of militarisation in Tibet along its borders shared with India is furthered by populating Tibet’s border regions with new villages, towns and airports, in an attempt to connect its every nook and corner.

In the past, both Doklam and Galwan crises have clearly shown the real intentions of China and its frequently broken promises.

The call by Indian Prime Minister Narendra Modi to the Dalai Lama on his birthday on July 6 this year was seen by many analysts as a clear departure from his earlier approach towards Tibet. A few weeks later, on July 21, Chinese President Xi Jinping made a surprise visit to Lhasa, the capital of Tibet, and Nyingchi, a city in Tibet close to Arunachal Pradesh. Xi emphasised the importance of Tibet for security and stability in China. During the Sixth Tibet Work Forum held in 2015, Xi had remarked that “governing border areas is key for governing a country, and stabilising Tibet is a priority for governing border areas”.

Since 2008, the Tibet Autonomous Region (TAR) has had the highest per-capita domestic security expenditure of all provinces and regions, researcher Adrian Zenz said in an article in 2018. “In 2016, per capita domestic security expenses in Sichuan’s Tibetan regions were nearly three times higher than for Sichuan province as a whole,” the article said. Hence, China’s apparent stability in Tibet is dependent on increasing domestic security spending. Hence, in the 14th Five-Year Plan, too, which Xi personally formulated, China has plans to improve comprehensive transport corridors in Tibet. Hence, India, too, needs to be vigilant about this aggressive development initiated by Beijing.

In the past, weak international support led to Tibet’s invasion and India losing a peaceful neighbour. The relentless damming, aggressive remilitarisation and repressive policies within Tibet will have far-reaching effects. Thubten Samphel, an independent researcher and former director of the Tibet Policy Institute, said, “The importance of the Tibetan plateau to Asia is threefold: geopolitical, cultural and environmental. What China does or does not in Tibet has geopolitical, cultural and environmental consequences for the rest of Asia.” Hence, in the future, the cooperation between the two biggest democratic countries may define the course of democratic values and security in Asia and the world.