Is Tibet Finally Going the Way of Xinjiang? 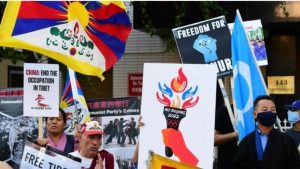 Joint protest by Tibetans and Uyghurs in front of the Chinese Consulate in Los Angeles. From Twitter.

The revelation of a cache of files containing thousands of sensitive images and classified speeches of the Chinese Communist Party (CCP) leaders further confirms the veracity of China’s crackdown on the identity and the culture of Uyghur and Turkic peoples. However, in the past, the Party-state has denied the existence of “transformation through education camps” in East Turkestan (Ch: Xinjiang).

Like Xinjiang, Tibet is another region where after the 2008 mass uprising, the Party-state has long accelerated its plan for the enforced assimilation of Tibetan people. Since 2009, the repressive policies resulted in the self-immolations of around 158 Tibetans. Despite the spate of self-immolations, the CCP has continuously denied human rights violations in Tibet.

In the past few months, the self-immolations of a popular Tibetan singer, Tsewang Norbu, and an elderly Tibetan, Taphun, reminded us that nothing has changed in Tibet. These self-immolators come from different backgrounds and age groups. Some were as young as 16-year-old and the recent self-immolator Taphun from Ngaba was 81-year-old. This indicates that the repressive policies of the Party-state have engulfed every section of Tibetan society. For instance, the commentary by Dolma Tsering has systematically described the causes for the composition of different age groups among the self-immolators. For the past few years, the Party-state has initiated a renewed crackdown on Tibetan culture, particularly on Tibetan Buddhism and the Tibetan language.

For the past few months, numerous reports highlighted deteriorating human rights violations and increasing repression in Tibet. For instance, according to the 2021 annual report of the U.S. Central Executive Commission on China (CECC), “The Party and government continued to restrict, and seek to control, the religious practices of Tibetans. Officials in Tibetan areas of China continued to enforce restrictions on religious observance or expression of faith, including prohibiting individuals from participating in religious events or celebrating holidays.”

For the past several years, Tibet scored only one out of 100 in the global freedom rankings, and the Freedom House 2021 report tied Tibet with Syria as the least-free territories in the world. The report further concluded that, “The government’s efforts to Sinicize Tibetan Buddhism have accelerated in recent years, with officials requiring Tibetan Buddhist clergy and lay believers to pledge their loyalty to the CCP and socialism above their religious beliefs, to denounce the Dalai Lama, and attend increasingly long political education sessions.”

Tibet Action Institute’s report released on 7 December 2021 further confirms the Party-state intentions to eradicate Tibetan identity and further assimilate the Tibetan people. The report highlights that the Tibetan students are at risk of losing their mother tongue and connection to their cultural identity because 1) Classes are primarily taught in Chinese. 2) They live apart from their families and communities and are, therefore, unable to practice their religion or access the most authentic expressions of Tibetan culture and traditions. 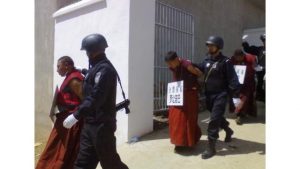 Buddhist monks arrested in Tibet after the 2008 uprising. Credits.

All these coercive and assimilationist measures implemented by China in Tibet require a very large amount of expenditure, and this is reflected in China’s oversized budget for maintaining “internal security.”

Finding similarities between Xinjiang and Tibet

There is no doubt that the source of intensive coercive measures in Tibet and Xinjiang is high domestic security spending by China. For instance, Adrian Zenz found that “During Xi Jinping’s term from 2013 to 2017, China’s domestic security spending grew 34 percent faster than total spending. In particular, security-related expenditures in sensitive regions such as Xinjiang and Tibet have risen so rapidly that they now exceed the United States average on a per capita PPP basis.”

Before becoming the Party Secretary of Xinjiang, for around five years Chen Quanguo, the mastermind behind the grid-style social management, was the Party Secretary of the Tibet Autonomous Region and the person who successfully laid the groundwork for the current planned implementation of the three-dimensional security measures in Tibet, as in the 14th Five-Year Plan 2021-2025. This involves what they call “rule of law,” specialized, and intelligent measures to maintain public order by combining the efforts of both professionals and the people for preventing and controlling crimes through public participation.

For instance, during a meeting in March 2017, Xinjiang governments were required to practice the Fengqiao experience, which is one of the parts of three-dimensional security measures, also known as Double Family Defense Stability Maintenance in Xinjiang. Hence, it is no surprise that during Chen Quanguo’s term as the Party Secretary in Xinjiang from 2016 to 2021 the so-called Fengqiao experience was introduced. The “Fengqiao experience” is the process of mobilizing the masses in order to “strengthen the dictatorship over class enemies.” 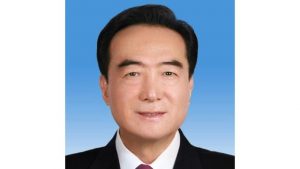 From the current developments in Tibet, it appears that the Party-state is implementing exactly what it has planned in 14th Five-Year-Plan. For instance, with the introduction of new regulations such as “Measures for the Administration of Internet Religious Information Services,” released on 20 December 2021 and came into force on March 1, 2022, exactly a year after the 14th Five-Year-Plan was officially endorsed by the National People’s Congress on March 11, 2021. The regulation banned all foreign organizations and individuals from spreading religious content online in China.

One reason for the acceleration of the Sinicization of Tibetan Buddhism is to fully control every nook and corner before the Party-state implements its grand plan in Tibet. The conclusions offered by the different reports further confirm that the situation in Tibet is further deteriorating with the implementation of repressive policies specifically aimed at eliminating Tibetan culture and Tibetan Buddhism. For instance, in the 2021 Shigatse Municipal government work report, the implementation of the Fengqiao experience and Sinicization of Tibetan Buddhism was encouraged. On the Dingri government website too, there is a mention of taking a major survey among the Tibetan people focusing on the stability, development, ecology and strengthening of the border.

The leaked Chinese police records are a strong reminder that the Party-state has taken every measure to suppress the Uyghur population and it is a matter of time before China’s iron curtain over Tibet will also be lifted. After all, the Party-state has skeletons in all its cupboards.

*Tenzin Tsultrim is a Research Fellow at the Tibet Policy Institute (TPI) a think-tank and research centre of the Central Tibetan Administration (CTA), Dharamshala,

Previous Post Border Villages in Tibet: Why India Should be Wary of China’s New ‘Eyes and Ears’ in Himalaya Next Post Recentering the Tibetan in Tibetan scholarship
Menu