Review: The End of an Era; India Exits Tibet by Claude Arpi

Claude Arpi’s four volumes on Tibet’s relations with India show how China developed its Tibet playbook that includes encroachment, occupation, and the spinning of a narrative of false claims. The last book in the series focuses on the last five years of India’s diplomatic presence in Tibet 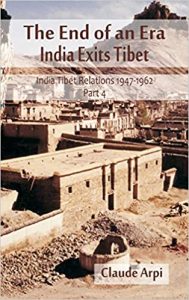 What’s happening with China these days? It is picking fights simultaneously with most of its neighbours. The only time communist China opened two fronts was in 1950 when it invaded and occupied Tibet and fought the US-led UN forces to a standstill at the present demilitarized zone between South and North Korea. Now, China is harassing Japan in the East China Sea, restricting the freedoms of the enraged people of Hong-Kong, and firing missiles across the Taiwan Strait and claiming most of the South China Sea, disputed by many countries in South East Asia.

The latest is China’s encroachment on Indian territory. On 15 June, PLA troops crossed over the Line of Actual Control in eastern Ladakh and were repulsed by the Indian army. China is doing everything according to its Tibet playbook: in the early 1950s, it occupied the Indian territory of Aksai Chin. Both in Ladakh and in the South China Sea, Beijing hopes to apply its Tibet playbook to establish facts on the ground and on water and later argue that possession is nine-tenth of the law.

How China developed its Tibet playbook that includes encroachment, occupation, and the spinning of a narrative of false claims is examined in rich detail by Claude Arpi in his four volumes on Tibet’s relations with India. Digging deep into the material at the National Archives and the Nehru Memorial Museum and Library, Claude Arpi’s latest offering focuses on his findings on the last five years of India’s diplomatic presence in Tibet.

As he writes in his first volume, the Chinese invasion of Tibet in 1950 presented newly independent India with a policy choice: was new China a friend or foe? In this debate, the friend camp led by India’s first Prime Minister Nehru wanted deeper cooperation with its new neighbour. The foe camp wanted India to treat China, now at its door step, as harbouring malign intent and recommended that the country beef up border security from Ladakh in the west to North-Eastern Frontier Agency (NEFA), now Arunachal Pradesh, in the east. In the policy choice India made, the China-as-a-friend camp carried the day. India handed all its extraterritorial rights including the trade agencies in Gyantse, Dromo (Yatung) and Gartok in Tibet to its new rulers,. In 1954, India signed the Panch Sheel agreement with China that formally recognized Tibet as a part of the People’s Republic.

One of the important documents Arpi has dug out and commented on is a report filed by Apa Pant to the Indian foreign ministry of his observations in Tibet. Pant was the Political Officer (PO) based in Gangtok. Since the days of the British Raj, the PO had looked after the affairs of Sikkim, Bhutan and Tibet. Apa Pant travelled to Tibet from November 1956 to February 1957 and met with the Dalai and Panchen Lamas, members of the Tibetan ruling elite and leaders of the Tibetan resistance. The observations Apa Pant made in his report was, in the words of Claude Arpi, “an eye-opener” for New Delhi.

Pant’s observations about the sentiments of the Tibetan people under their new rulers and his predictions about China’s plans for Tibet in the future are sharp and prophetic. Regarding the true feelings of the Tibetan people under Chinese rule, Apa Pant observed, “Due to fear and the realization of their military, (as well as) the weakness of the Tibetans (they) are keeping quiet but have neither mentally or emotionally submitted themselves to the Chinese rule nor accepted it as the final dispensation.”

About China’s future plans for Tibet, Pant wrote: “Only when roads, aerodromes and perhaps a railway line are completed millions of Chinese will start flooding into Tibet and settling there permanently.” Claude Arpi adds that this “has come true 60 years later.”

Claude Arpi’s fourth and final volume in his examination of Tibet’s relations with India from 1947 to 1962 ends with the closure of the Indian Consular General in Lhasa. New Delhi cited the severe restrictions imposed on the consulate for its closure. In hindsight one wonders whether the closure of the Lhasa consulate was a wise thing to do. If it had remained open, weathering Chinese restrictions and the chaos of the Cultural Revolution, New Delhi would have had a keener sense of what was happening behind the Himalayas.

For scholars and researchers interested in this phase of Tibet’s relations with India, Claude Arpi’s books will remain essential reading. These four volumes are a seminal contribution to our understanding of Tibet’s interaction with both India and China and India’s interaction with China on Tibet at a critical period in history.

Thubten Samphel is an independent researcher and a former director of the Tibet Policy Institute. This book review was originally published in the Hindustan Times on 11 September 2020.