Review: The Ninth Panchen Lama (1883-1937): A Life at the Crossroads of Sino-Tibetan Relations 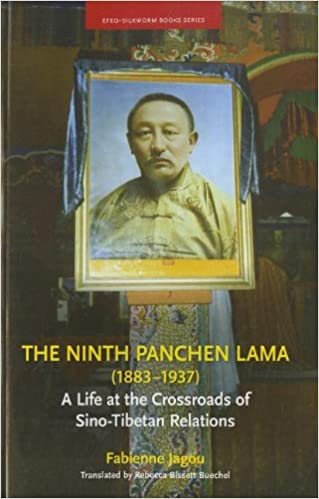 Lozang Choki Nyima Gelek Namgyel, the Ninth Panchen Lama lived fifteen years in exile in Inner Mongolia and China until his premature death at the age of 54. Far away from home, the prelate played a significant role in the Sino-Tibetan relations. The prelate was inspired by Sun Yat-sen’s  “Three Principles of the People,” namely, nationalism, democracy and the well-being of the people. The prelate emphasized that Sun’s principles “aim at eliminating the suffering of the people and at bringing happiness to the greatest number possible, while the Buddhist doctrine supports these ideals of equality and elimination of suffering”. The prelate in fact likened Sun’s principles with Buddhist ideals and propagated them from Buddhist perspective in his role as an ambassador of Chinese dream, which was then the “union of the five nationalities”. In addition the Panchen Lama was given the task to publish a bilingual (Tibetan and Chinese) specialized journal to transmit and further disseminate the Republican government’s message.

The prelate perhaps was not aware of the fact that harmonious co-existence of the five nationalities (Chinese, Manchu, Tibetan, Mongolian and Muslims) proposed by Chinese leaders was nothing but a policy of cultural assimilation. From the beginning Sun Yat-sen had been undisguised proponent of assimilation.  As late as 1921, he had stressed that the non-Han peoples of China were destined “to be melted in the same furnace, to be assimilated within the Han nationality.” Chiang Kai-shek was no exception. He denied the existence of ethnic minorities regarding them rather as “branches of Han”.

Unlike the Dalai Lamas, the Panchen Lamas had a relatively longer life exerting greater political influence in regional politics. Considering the fact that most of the Dalai Lamas after the establishment of Gaden Phodrang government lived short lives. Particularly, the Ninth to Twelveth Dalai Lamas all died at a young age under mysterious circumstances. The Ninth Dalai Lama LungtokGyatso (1805-1815), for instance, had the shortest life span in the lineage. This offers us a telling case study. One popular narrative surrounding the early death of the Dalai Lamas, precisely before taking political power, had to do with the political influence of the regents at the time.

On contrary, some of the Panchen Lamas had enormous influence as a mediator. The Sixth Panchen Lama at the request of Bhutan mediated between British India and Bhutan following the latter’s defeat at the hands of the British Indian troops.

In her quest to search for an answer to a question on which this book is entirely predicated, Jagou has used primary sources from multiple languages to give the book credibility and more importantly serious perspective of that bygone era.

This brings us to the question: What prompted the Panchen Lama to leave his abode in secrecy and go into exile? The prelate’s decision to escape is certainly linked with the Tibetan government’s imposition of huge amount of tax on Tashilhunpo monastery, the Panchen Lamas main spiritual seat in Shigatse, the second largest town in Tibet, for the upkeep of the new Tibetan standing army. According to the missive the prelate had supposedly left behind before his escape reveals his concern and inability to pay the “extraordinary tax” that roughly accounts to one-quarter of Tibet’s military expenses. The missive also reveals an important point that the prelate would seek financial assistance from Kham and Mongolia meaning that he initially had no intention of going to China.

During his exile, the Panchen Lama was bestowed the title “Great and Glorious Master Panchen Who Protects the Country and Propagates its Values ” following a request from an influential Chinese Education Minister Dai Jitao, who was believed to be a devout Buddhist. The title came with an annual allowance of 120, 000 Yuan. Not long after, the Mongolian and Tibetan Affairs Commission (MTAC) gave the prelate the new title “Emissary in Charge of Spreading Values in the Western Region”. The MTAC would provide necessary resources to the prelate to ensure that everything would fall in the right political direction. The creation of MTAC in 1928 following a change in its name and institutional structure from old Qing Ministry ruling the Outer Provinces underlines Republican leaders emerging interest in Tibetan and Mongol issue.

In reciprocity, the Panchen Lama was planning to develop Tibet with much-needed help from the Chinese authorities. His development project primarily involved educational infrastructure and communication networks. The Ninth Panchen Lama like the Thirteenth Dalai Lama realized the importance of modernity during their exile years. Their dreams of modern Tibet in accordance with science and military didn’t materialize, unfortunately.

To facilitate the nuanced understanding of Sino-Tibetan relations of that era, the book is primarily divided into three parts. The first part deals with the economic and structural causes behind the flight of the prelate. The second part explores the prelate’s extensive role in renewal of Buddhism in China through transmission of great number of teachings and the creation of associations and Buddhist institutes. The final part is about the prelate’s desire to return home that unfortunately turned futile under the lack of sincere support from the Republican government and partly due to the lack of loyalty from some influential members of his own entourage.

Jagou has couple of takeaways for readers. First, the whole story revolves around the strategic importance of Tibet in the eyes of British India and the Republic of China. In the process of securing upper hand, British manipulated or encouraged the Thirteenth Dalai Lama to build a robust Tibetan army that could defend its sovereignty and act as a buffer between British India and China, while the Ninth Panchen Lama was manipulated by Chinese to achieve their vision. Second, the relationship between the Dalai Lama and the Panchen Lama was genuinely friendly, but the inner circles of the two Lamas had sown discord between them to gain personal privileges.

As a reader I would highly recommend this book to those who are interested in knowing about Sino-Tibetan relations of the last century. It goes without saying that Jagou ‘s excellent research makes her book one of a kind.