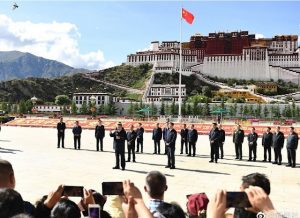 Xi Jinping speaking to a group of people in front of the Potala Palace (Photo: Xinhua)

Chinese president Xi Jinping visited the so-called Tibet Autonomous Region (TAR) from July 21 to 23 to commemorate the 70th anniversary of its supposed “Peaceful Liberation of Tibet.” Though his visit came as a surprise with no official announcement, but not entirely without indication. Two official notices were issued just ahead of Xi’s visit. Lhasa municipality People’s Government issued a notice on July 20 to prohibit the use of drones, kites and balloons from July 21 to August 27. The reason cited was to ensure flight safety during the celebration of the 70th anniversary of the so-called peaceful liberation of Tibet. Another notice issued a day after by the Potala Palace Administration Office on 21 July announcing the closure of the palace on July 22. As Robert Barnett who is expert on contemporary Tibet was quoted as saying, Xi’s visit was “ostensibly about the opposite of security”, the notices are certainly linked to low key security arrangements for Xi’s visit to the TAR, particularly the closure of Potala Palace on July 22, the day when Xi visited Drepung monastery, Barkor street and the Potala square in Lhasa, the capital city of Tibet.

In addition, a report noted the occurrence of unusual activities in Lhasa where security officials for no apparent reason calling people to monitor their movements several days before Xi’s unannounced visit to the TAR. The same report noted that several sections of roads in Lhasa were cordoned off. 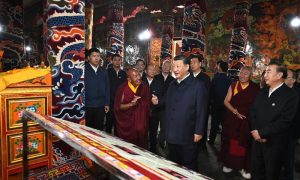 Prior to TAR, Xi has visited Qinghai province from June 7 to 9 ahead of the centennial anniversary of the founding of the Chinese Communist Party (CCP). Unlike Qinghai visit, where no single Tibetan party cadre was seen accompanying Xi, his visit to the TAR was flanked by many Tibetan party and government officials but Wu Yingjie (Chinese) and Che Dalha (Tibetan), two top honchos of the TAR Party Committee, escorted Xi throughout the tour.

During his three-day inspection tour, Xi first landed at Mainling aiport in Nyingtri (Chinese: Linzhi) and then Lhasa. As usual, in a carefully choreographed fashion, he visited a home of Tibetan family in Gala (རྒྱལ་ལ) village in Bayi district of Nyingtri prefecture-level city (བྲག་ཡིབ་ཆུས་ཉིང་ཁྲི་གྲོང་རྡལ་ཀ་ལ་གྲོང་ཚོ།). It has become a routine for party-state leaders to visit selected Tibetan homes when they are in Tibetan areas. Xi paid a similar home visit to a nomadic Tibetan family last month when he was in Kangtsa County of Tsojang Tibetan Autonomous Prefecture in Qinghai Province (མཚོ་སྔོན་ཞིང་ཆེན་མཚོ་བྱང་བོད་རིགས་རང་སྐྱོང་ཁུལ་རྐང་ཚ་རྫོང་།). This kind of visits are intended to show that the CCP is the ultimate savior of Tibetan people, not Tibetan Buddhism.

Xi has developed a special connection for Nyingtri. This connection goes back to over two decades. Xi first visited Nyingtri in June 1998 when he  was the Party Secretary of Fujian province to inspect the projects linked to aid-Tibet program. This program was started in the TAR after the Third Tibet Work Forum in 1994. The program was designed to facilitate the infrastructure development and generate employment, thereby boosting the overall economy of TAR with the help of affluent Chinese provinces. Xi’s second visit to Nyingtri came in July 2011, when he was the Vice-President of China. 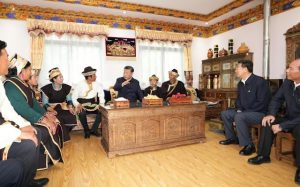 Xi led 59-people delegation to Lhasa to commemorate the “60th anniversary of the Peaceful Liberation of Tibet”. He also visited Nyingtri and Shigatse.

From a succession point of view, it is interesting to compare Xi’s last two TAR visits. In 2011, it was certain that Xi would succeed Hu Jintao as the General Secretary of the CCP and the President of China. But this time things are more complex and murky pertaining to his successor. Xi’s ten-year tenure will come to an end in fall of 2022 but he hasn’t groomed any potential successor so far, thereby leading to a speculation that he would reign beyond 2022. This speculation is not entirely baseless. We witnessed a radical change in the history of CCP in 2018 when the National People’s Congress amended the constitution by removing the presidential term-limits. This lead to a further fear since there is no term limit set for the General Secretary of the CCP. Under such scenario, it is likely that Xi would stay in power for at least another five years. What remains to be seen is whether Xi will follow the long-held party tradition set by Deng Xiaoping where the incumbent General Secretary of CCP and Chairman of the Central Military Commission would step down from power and hand it over to a sixth-generation leader at the forthcoming 20th Party Congress in 2022.

Another important aspect of Xi’s recent visit to Nyingtri, which is adjacent to Indian border of Arunachal Pradesh, can be seen from a security angle. Although the Chinese media reports did not mention India, however Xi’s visit was perceived as China’s aggressive attitude towards India against the ongoing border disputes. The involvement of General Zhang Youxia who is one of the Vice Chairmen of the powerful Central Military Commission in Xi’s entourage reflects the significance of this visit. And the coming of Nyintri-Lhasa section of Sichuan-Tibet railway coupled with the full operational Qinghai-Tibet railway connecting Shigatse has become a growing concern for India. On the last day of his inspection tour, Xi met with officers of the People’s Liberation Army and People’s Armed Police Force stationed in Lhasa. Xi lauded for their defense of China’s territory and in tandem urged them to “strengthen comprehensive military training and preparations.” A year before, Chinese State Councilor and Foreign Minister Wang Yi visited undisclosed border area during his inspection tour to the TAR, highlighting China’s strategic importance of Tibet premised on Xi’s strategic thinking that “to govern the country we must first govern the frontiers, and to govern the frontiers we must first ensure stability in Tibet”(རྒྱལ་ཁབ་སྐྱོང་བར་ངེས་པར་དུ་མཐའ་མཚམས་སྐྱོང་དགོད་པ་དང་། མཐའ་མཚམས་སྐྱོང་བར་སྔོན་ལ་བོད་བརྟན་ལྷིང་ཡོང་བ་བྱེད་དགོས།). This strategic formulation was initially endorsed at the sixth Tibet Work Forum in 2015.

Several days after Xi’s visit to the TAR, it was reported that China’s handpicked 11th Panchen Lama Gyaltsen Norbu attended a conference in Sichuan province in early July. There he visited Tibetan areas of Kardze (Chinese: Ganzi) and Ngaba (Aba) prefectures in Sichuan province. He also travelled to Gansu province where he visited Labrang Monastery, the abode of Jamyang Sherpa Rinpoche who said to have appointed best geshe (erudite scholar) from his monastery to become the principal tutor for Gyaltsen Norbu. His latest visits indicate Beijing’s attempt to raise his “domestic” image despite being repeatedly snub by Tibetans whenever he comes to Tibet.

It is interesting to note that no significant policy shift is seen from Xi’s visit to the TAR. Stability and economic development, keeping in view of national unity remains the two guiding principles in governing Tibet in the new era. In nutshell, Xi’s visit to the TAR can be summed up on the four major issues of stability maintenance, economic development, ecological protection and developing border areas.