The Price of Penning an Essay

On 16 April, 2019 a report emerged of an arrest of a Tibetan student from the Northwest Minzu University in Lanzhou city in what is now administered under the Gansu province. According to Radio Free Asia, a Tibetan student named Sonam wrote an essay decrying the lack of government job opportunities for graduating Tibetan students in Tibetan region. The price for writing that essay proved disproportionately high for Sonam as he was arrested and we know little about his whereabouts.

Sonam’s piece was widely distributed and “went viral” on China-based social media. He is a Tibetan Master’s degree student and was “hauled out of classes earlier this month” by the “Tibet Education Bureau in China.”

As with most reports emerging out of Tibet, the details regarding his arrest and the content of the essay is yet to become publicly available for examination. A source interviewed by RFA added that in the University which was the first minority institution for higher learning founded after the establishment of the People’s Republic of China in 1949, students who maintain contact with Tibetan exiles in India “are particularly” put “under surveillance by Chinese authorities.”

A researcher at the Tibetan Centre for Human Rights and Democracy, Pema Gyel has argued that his arrest is unconstitutional. The arbitrary detention of Sonam is, according to Pema Gyel “is unconstitutional as per article 35 of the Constitution of PRC. (་རྩ་ཁྲིམས་དོན་ཚན་༣༥བ་དང་འགལ་ཡོད་པ་ཉམས་)”

However, it is worthwhile examining what economic and political reality that Sonam and his cohort face that compelled him to write the essay. Could this be an isolated case of personal grievance aired publicly or whether there is a structural and more entrenched issues surrounding Tibetan representation in public employment.

Types of public Employment in PRC

In broad terms, public employment is generally categorized into civil servants (gongwuyuan 公务员) and public service unit employees (shiye danwei 事业单位). Civil servants are considered prestigious with considerable administrative powers in legal system, law enforcement, inspection bureaus, positions in all ministries and government agencies. Whereas, public service units are associated with public institutions providing public services such as education, culture, science, health, environmental services and employment in the state media. Major distinction in terms of recruitment in the China-administered Tibet Autonomous Region is that the recruitment in public service units are carried out at the provincial level. Whereas in other parts, recruitment is done directly by its local public institutions. These positions compared to civil servants are considered less prestigious with lower pay grade, fewer benefits and lack of administrative powers.

The recruitment process for public-sector posts generally consists of two stages. The initial stage where applicants have to sit through a written exam (bishi 笔试), following which the applicants enter the interview stage (mianshi 面试). The “minorities” are generally awarded added points in line of preferential policies.

For jobs requiring competence in Tibetan language, there are two types of Tibetan-medium requirement for job application. The first type requires tertiary degree in Tibetan medium. The second type requires some level of Tibetan language proficiency and is generally referred to as bilingual positions (shuangyu 双语). This is the only type of job opportunity that is exclusively aimed at Tibetan applicants. 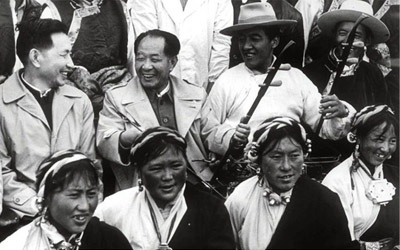 When Hu Yaobang visited Tibet in May 1980, he made a passionate and vocal speech to a gathering of over 5,000 cadres in Lhasa. Among other pragmatic propositions, he suggested implementation of “policy on minority nationality cadres correctly” and he remarked transfer “of a large quantity of Chinese cadres who had worked in Tibet for many years back to the interior.”

China has since 2003 made the data concerning Tibetan participation in public sector unavailable in its statistical yearbooks. The data till 2003 shows a sharp decline in the number and share of Tibetan staff and workers in the state-owned units between 2001 and 2003. During the same period number of non-Tibetan workers in these units registered steady rise in their participation. Due to the lack of disaggregated data, the trend since then is hard to gauge even as parts of the economy have been growing at a very high rate.

In an academic paper in China Quarterly by two leading scholars on current China’s policies in Tibet, Adrian Zenz and Andrew Fischer delved deep into a set data that was by 2015 remained unexamined in scholarly publications in English. This data is derived from routine advertisement of vacancies by local governments at provincial, prefectural and county level administration. The lists of advertised posts stared appearing online in 2006, and a comprehensive data of all public job categories became available including Tibetan areas as administered under the People’s Republic of China.

Sonam’s piece on China’s social media is a mere reflection of resentment caused by severe lack of job opportunities for educated Tibetans in Tibetan medium. The data published and job advertisement posted by the same administration points to disregard for Tibetans graduating in Tibetan medium. For Sonam, his crime is articulating what is essentially the failure on part of the administration to provide opportunities Tibetans graduating in Tibetan medium. It is a shame that his essay is unavailable to us as it appears to have been wiped-off from the cyberspace as soon as his piece started to generate a debate.