Tibet: an environmental crisis in waiting

London: Representative Mr. Sonam Tsering Frasi, Office of Tibet, London was invited by Lord Bruce, President of the Democracy Forum to give introductory remarks in a virtual panel discussion organised by the Democracy Forum. Watch here.

Lord Bruce, President of the Democratic Forum extended a warm welcome to the team of experts and panelists for agreeing to participate in the public event discussing a topic of such profile importance organised by the Forum. He mentioned a view of crises facing Tibet today was clearly enunciated at the Paris climate summit in 2015, highlighting a recorded message for the summit from His Holiness the Dalai Lama. 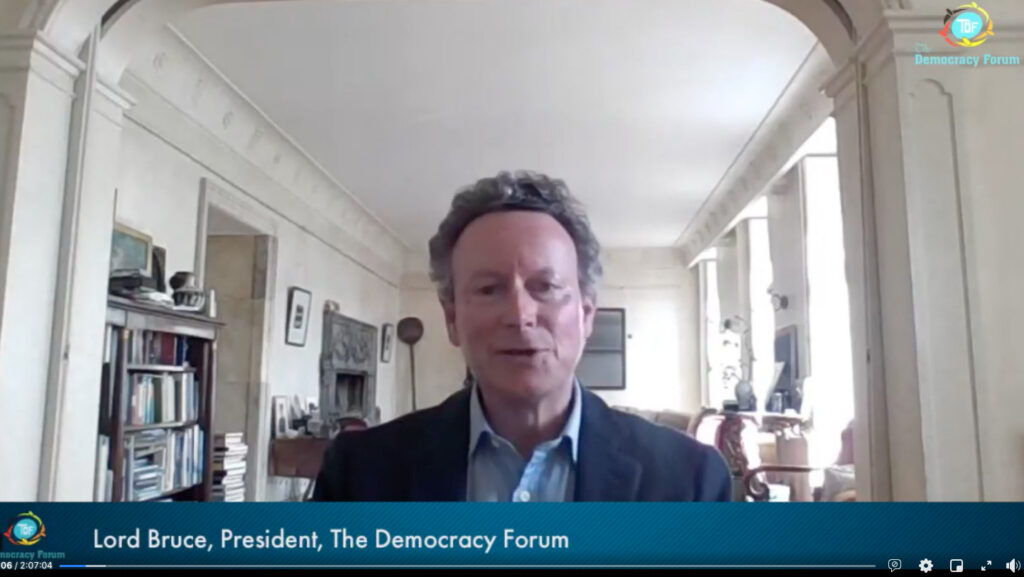 Lord Bruce, President of the Democratic Forum addressing the panel.

“Tibet is the roof of the world, the third pole. Once its ecology is damaged, it would take a longer time to recover”, he emphasised the impact of the plateau on the lives of billions of people in China, India, Pakistan and Bangladesh. This is not a question of one nation or two nations. This is nothing less than the survival of humanity. Mr Bruce highlighted the importance of the preservation of Tibet’s rivers and informed data and report from the Tibet Policy Institute and UN team on China’s mismanagement of Tibet’s resources which led to the rising temperature faster than the global average causing flood in the country. Finally, he shared his anxiety about glaciers facing an awful scenario and assuming the audience will draw their own conclusion after listening to the speakers.

Representative Sonam Tsering in his introductory remarks said The Tibetan Plateau is called the Third Pole because its glaciers, ice fields and permafrost, contain the largest deposits of freshwater sources outside the two polar regions. Many of the most famous rivers of Asia flow out of Tibet, making Tibet, the water tower or the water reservoir for a very large part of the Indian subcontinent and the whole of South-East Asia. The Crisis in environmental issues in Tibet has adversely impacted the Tibetans already. The Chinese Communist State in the name to protect the headlands of rivers that feed the Yellow, Yangtze and Mekong have involved the uprooting, relocation and settlement of thousands and thousands of Tibetan nomads. Regardless of any political or cultural view, the environmental impact of the Tibetan Plateau – the Third Pole – is one of the key issues of our time. To mitigate and plan for such a future, requires a sustained international response focused on the preservation of the Tibetan Plateau as well as on the question of Tibet’s sovereignty. 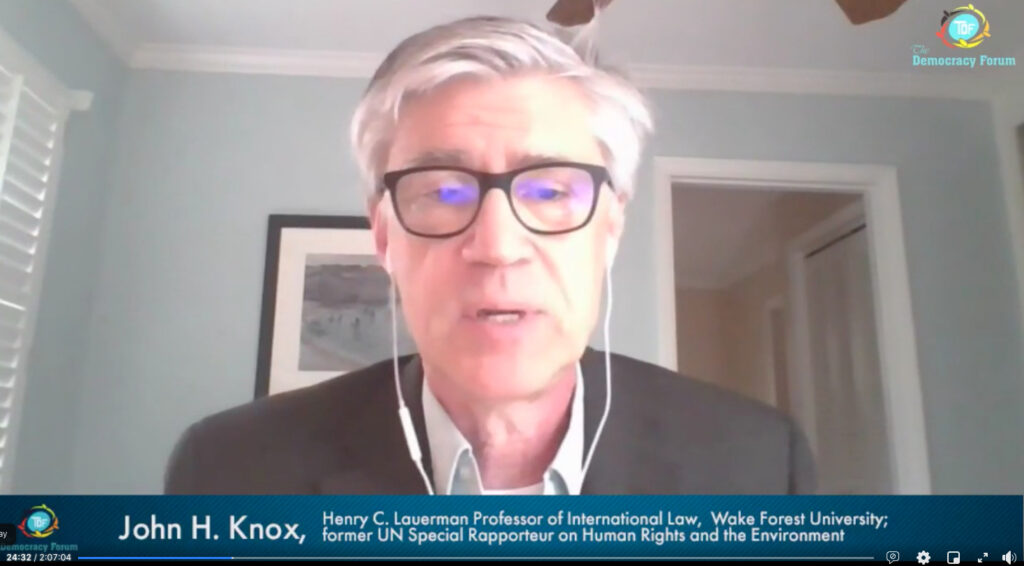 Professor John H. Knox, in his remarks, said that the core of the rights-based approach to environmental protection is to the protection of the rights of environmental human rights defenders. That is those who work to protect the only right is to protect the right of others. This means that China like every other country has an obligation to protect the rights of those who criticise its policies. Not to detain them or prosecute them for peaceful actions and protest. An obligation to investigate and punish actions taken to persecute them. Unfortunately, these rights are often not protected in many countries perhaps most countries in the world. Environmental defenders are often at great risk. In recent years, UN special rapporteurs said multiple communications to china raising concerns about critical allegations that Tibetans should protest against mining and other environmental issues as well as other human rights issues such as rights to teach Tibetan language in school.

Tempa Gyaltsen Zamlha, senior fellow/Head of Tibet Environment Desk, Tibet Policy Institute in Dharamshala in his presentation mentioned that Tibet is called the Third pole because the Tibetan plateau is home to the third-largest concentration of ice beside the north and south pole with 46000 glaciers on the plateau.

He further stressed that because of the large presence of ice on Tibet’s plateau, it also influences climate condition across Asia and as far as Europe and North America. He mentioned that there are some scientific findings that the intensity of the monsoon is influence by what’s happening in the Tibet plateau and also recent increase in heatwave across Europe is also due to the loss of glacier on the Tibet plateau. This means the importance of the Tibet plateau is not only across Asia but also for Europe and America. 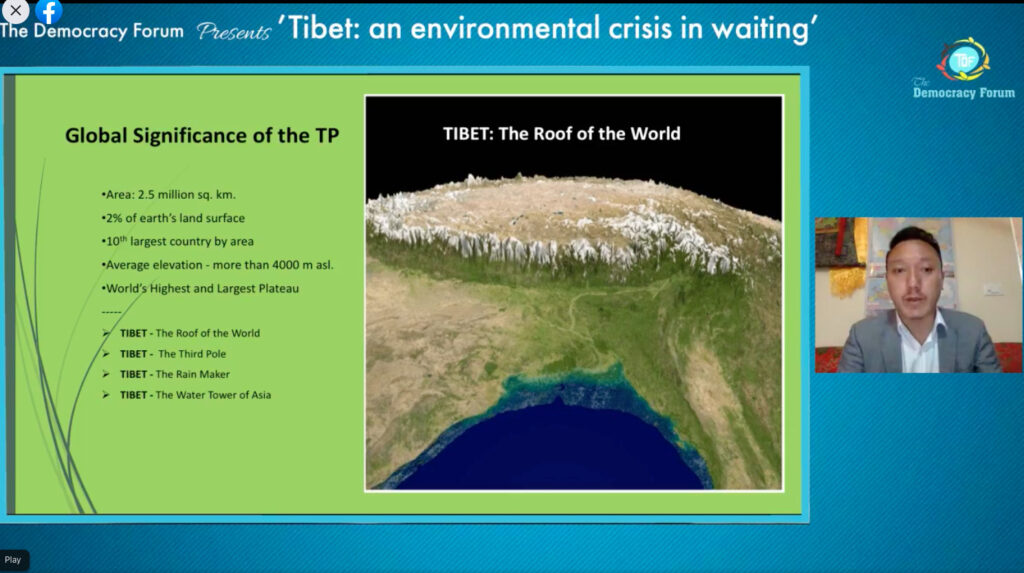 Dechen Palmo, an Environment researcher in her presentation mentioned the increased number of dams built in China and Tibet. According to the International Commission on large dams, China has 23,841 large dams, accounting for 41% of the world total dams. China is one of the three countries in the world that voted against the convention on the law of Non-Navigational Uses of international watercourses adopted by the UN general assembly in 1997.

Mrs Palmo particularly spoke about the importance of the Mekong river in Tibet, the longest river in south-east Asia and the flow of the river dropped due to China’s construction of dams.

Finally, Barry Gardiner MP and chair of The Democracy Forum in his closing remark said ‘we failed to hold the loss of biodiversity in 2010, we failed in 2020 and here we are beginning in a new decade and China is really committed to setting in place a target that doesn’t fail. Now there are two ways you can do that. You can either reduce the aspiration level of the target themselves so they are easy to meet. We do need very serious diplomatic engagement with China at an early stage in order to ensure that there is real cooperation that we bring to COP15 and they bring to COP26 in return. I think we need to be looking for areas where we can engage together because this is critical’.

Filed by Office of Tibet, London. This report was originally published in tibet.net on 18 March 2021. 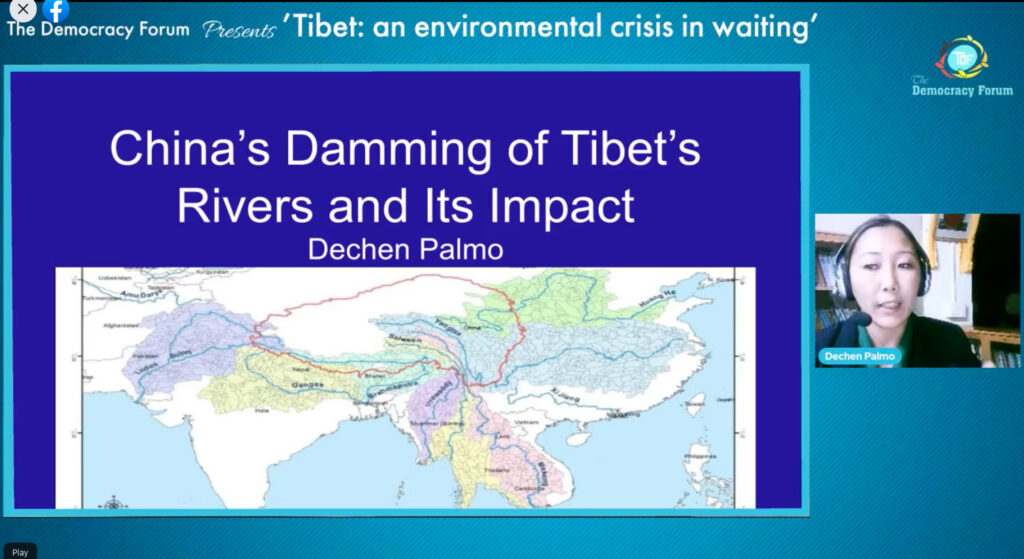 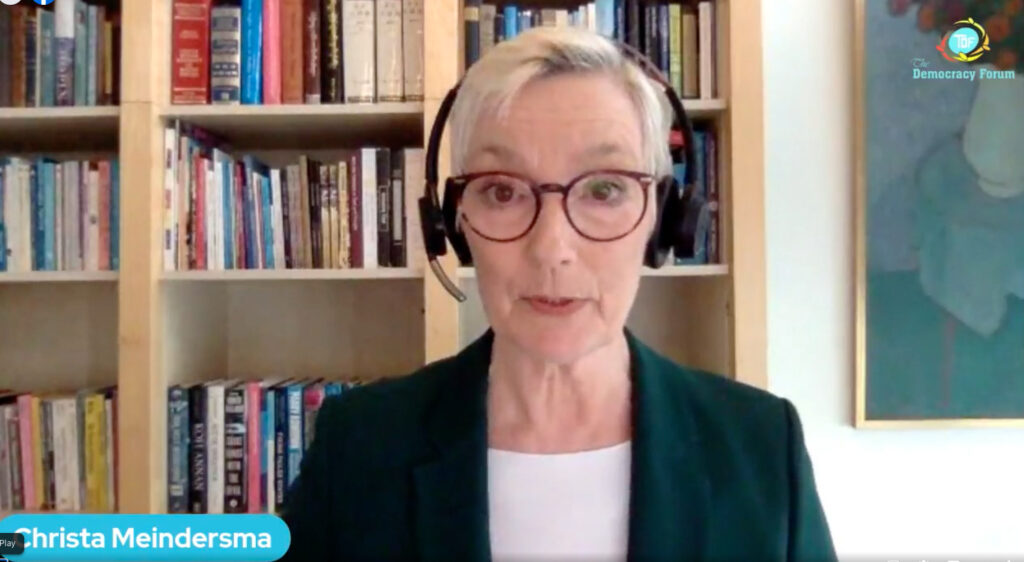 Christa Meindersma, Director of Advocacy and Communications, ICT Europe speaks on the impact of biodiversity. 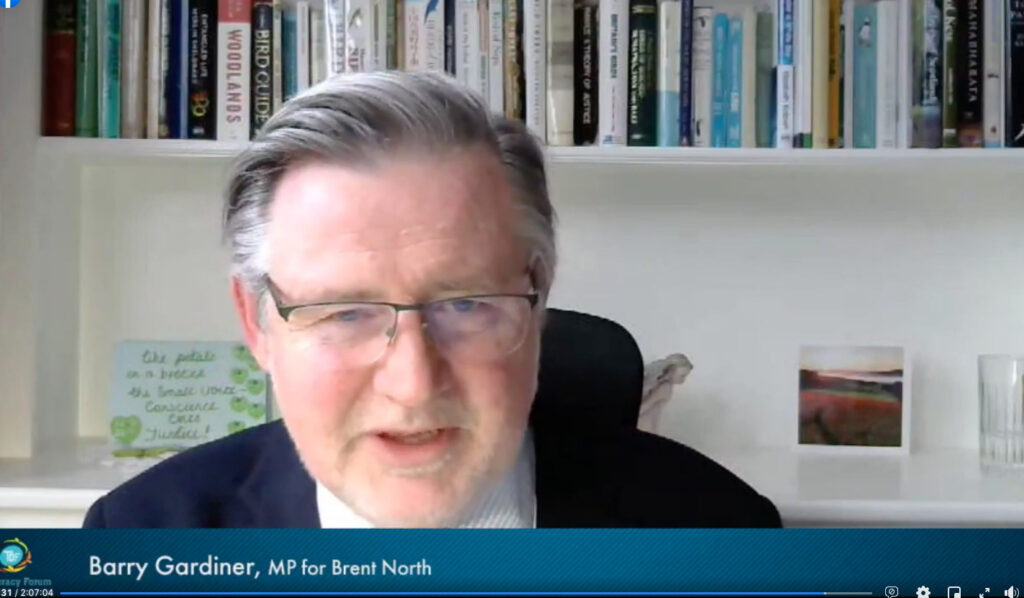 Barry Gardiner MP and chair of The Democracy Forum speaks on need for diplomatic cooperation with China.