Two researchers from Tibet Policy Institute gave a five-day talk  (August 8-12, 2014)  to more than 4500 Tibetan people residing in Mundgod Tibetan Settlement in South India. Their objective was to inform the Tibetan community by sharing observations they have made during their ongoing research into issues such as the Status of Tibetan Language and Status of Nomads in Tibet.

Researchers Tenzin Pema and Thinley Wangtop visited the schools, monasteries and a nunnery in addition to nine villages of the Settlement, where they spoke to large gatherings. On Tibetan language, researcher Tenzin Pema said, it is not only deteriorating, usage of language is increasingly minimized, whereas the Chinese language is given importance. This, she said, is a threat to the identity of the Tibetan people who are striving hard, including risking lives, for the protection of their language. Researcher Thinley Wangtop explained that large-scale resettlement of Tibetan Nomads from 2003 onward is caused by China’s Grassland Law and Ecological Migration policy. Though intended to protect the environment and alleviate nomad condition, these policies have resulted in unemployment, reduction in livestocks, rise in mining ownership, etc.

More than two hours of discussion ensued after speaking to a select group of forty-five people holding official positions in the Settlement. The Jangtse Thoesam Norling School evinced special interest by inviting researchers to give their presentation to more than 300 monk students. School children posed some challenging questions such as : Why China is oppressing Tibet? Why China is eradicating Tibetan language ? How do nomads move from one place to the other?

While a woman became very emotional listening to researchers, quite a few elderly people used the opportunity to remember and share their feelings of a nomadic life they once lived. Many people said the research informations were useful & suggested similar talks should be given to Tibetan youths in future. [ END ] 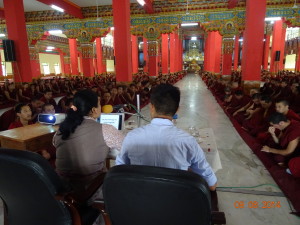 About 1,000 monks of Drepung Loseling Monastery listening to researchers talk on August 9, 2014. 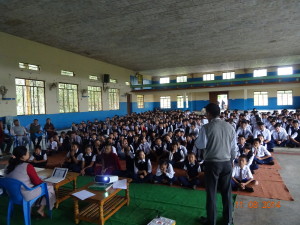 Teachers and students of CST Main School with researchers in the Community Hall on August 11,2014. 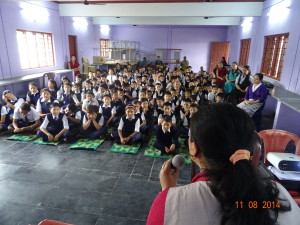 Researchers with students of CST school located at Camp # 6 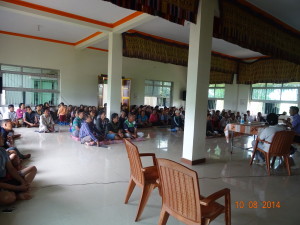 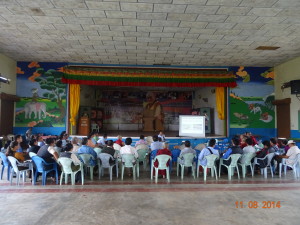 Local dignitaries taking part in the talk on August 11, 2014.