What Do You Get for the Man Who Has Nothing?

ANAHEIM, Calif.—How do you celebrate the landmark birthday of a man who already has global fame and a Nobel Peace Prize, yet is also a Tibetan monk who eschews materialism?

Southern California is seeking the answer. So far, it includes plenty of cake and a personalized hockey jersey. 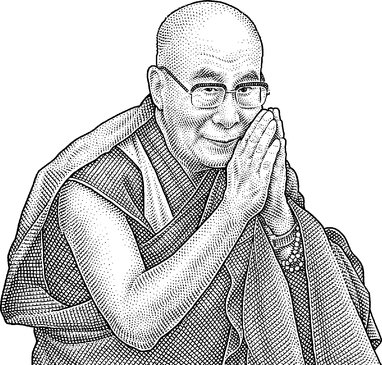 throughout the world, but the official observance will take place Sunday in Anaheim’s Honda Center, home of the National Hockey League’s Anaheim Ducks. There, the Dalai Lama is scheduled to give an address on “awakening compassion.”

Birthday planners here are tackling more prosaic concerns, such as what kind of cake the earthly manifestation of the Buddhist enlightened being Chenrezig might prefer.

“I was thinking, ‘What would a simple man like for a birthday cake?’” said pastry chef Colleen Johnson, who organizers approached about taking on the task. Ms. Johnson, head pastry chef for the culinary school at the Art Institute of California-Orange County, lived in Japan and has read the Dalai Lama’s books.[Source]