What Xi didn’t say about national parks on Tibetan Plateau 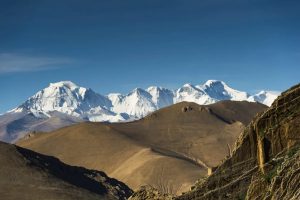 At the UN Biodiversity Conference in Kunming last year, Chinese President Xi Jinping proudly announced the establishment of his country’s first five national parks. What he did not acknowledge in his speech were the human-rights violations that underpinned the establishment of at least one of these parks, Sanjiangyuan (Three River Source) National Park on the northeastern edge of the Tibetan Plateau.

Sanjiangyuan National Park, the largest of the five parks Xi declared, was established on Tibetan land. It covers the sources of three of Asia’s major rivers, the Yangzi, the Yellow, and the Mekong, and covers around 190,700 square kilometers, or about 14 times the size of Yellowstone National Park in the US.

It required the reversal of Tibetan nomads’ grazing rights and their effective eviction from their homelands. This decision will have long-term social, economic, and environmental impacts.

Not only is this form of conservation a human-rights violation and a land grab, but as many conservationists have pointed out, it does not work. So why has the Chinese government pursued this policy?

The declaration of Sanjiangyuan National Park in 2021 followed a long period in which China’s central government acquired land in this region ostensibly for ecological preservation.

Beijing first declared the area the Sanjiangyuan National Nature Reserve (SNNR) in 2000. Then, in December 2015, the Central Leading Group on Comprehensive Reform upgraded the region’s status to the Sanjiangyuan National Park (SNP) as a pilot for China’s new national park system. After this pilot was declared successful, the government established SNP within the first batch of five Chinese national parks.

Many in China and the international community responded positively to the park’s establishment. Tibet’s landscapes are renowned for their other-worldly, sublime beauty and many people wish for these landscapes to be preserved. But we also must consider how the Tibetan Plateau’s fragile biodiversity is conserved, whom this conservation helps, and what other motivations conservation can obscure.

The nomads – known as drokpa or “people of the high pasture” in Tibetan – had lived within this region for thousands of years. Not only had they not degraded its biodiversity, but their seasonal pastoralism had become vital to the grasslands’ ecological health and helped animal productivity.

Removing them from the region was unnecessary to create a national park, but the Chinese state used the park’s establishment as an excuse to resettle them. The government claimed that the nomads’ traditional pastoralism resulted in overgrazing and led to the gradual desertification of the grasslands.

As the region’s conservation status was upgraded, the park enforcers worked to remove Tibetan nomads from their ancestral homes within the park’s boundaries. They began this resettlement process in 2005, and it continues today.

Ecologists and others disputed the government’s claims that the nomads were to blame for the region’s degradation. They suggested that unchecked development had led to this degradation rather than traditional nomadic practices.

They were particularly concerned with large infrastructure projects such as mining and railroads that disrupted the region’s ecosystems and the privatization and fencing of pastures that limited domestic herd and wildlife movement.

The dispossession of the nomads in the area has not ceased now that the park has been established. According to the UK-based non-governmental organization Free Tibet, on May 10 this year, 170 Tibetan nomads from Chedru village in Gade county in the Golog Tibetan Autonomous Prefecture were detained “for opposing the directive of confiscating grazing land from nomads if they cannot provide paperwork.”

Gade county is in Sanjiangyuan National Park’s hinterland. The Chinese government may dismiss this as a random check on paperwork. It may also say that if the nomads had the paperwork, a Grassland Use Certificate, they would have been able to continue grazing the land. But for many in the nomad community, the idea that they need paperwork to herd their animals on land their ancestors inhabited for thousands of years must seem absurd.

Although the Tibetans own the grassland in accordance with the 2002 Grassland Law of the People’s Republic of China and have been given the rights for long-term use, local authorities used ecological preservation as an excuse to revoke their permits and confiscate their grasslands.

A local source who spoke with Tibet Watch told the organization:

“Previously, the Chinese authorities have given Grassland Use Certificates to Tibetan nomads, declaring grazing rights for 50 years while guaranteeing nonintervention from the government. [But] beginning this year [2020], they have withdrawn these grazing rights and have started collecting previously given grazing rights certificates from nomads.”

The Chinese government claims to have provided the displaced herdsmen with work as park rangers in lieu of their confiscated Grassland Use Certificates and the livelihoods that their livestock management allowed.

According to Zhao Yingmin, vice-minister of ecology and environment, “Over 17,000 herdsmen have been offered jobs as rangers at Sanjiangyuan, resulting in an average annual increase in income of 21,600 yuan,” or US$3,230.

At face value, this sounds like a wonderful opportunity for the herders to make a stable income. However, the average annual salary in Qinghai is 90,929 yuan ($13,595), and people who earn under 2,000 yuan a month are included within the “low-income category.” The “ranger” jobs are unskilled and low-paying. The government has not offered them any ecological training, nor does it listen to their traditional knowledge about grassland management.

This approach does not have to be part of the establishment of a national park system in China. Instead, it is part of the Chinese government’s calculated cultural genocide and land grabs against the Tibetans.

The expulsion of nomads from these grasslands has been used along with other programs like the ecological resettlement program, comfortable housing program, poverty elevation program, rangeland privatization, and labor training and transfer programs to dispossess and more easily monitor the Tibetans.

The establishment of the national park in this region enables the government to force the Tibetans to settle in state-made, high-density, concreted, surveilled villages where their movement and activities can be watched.

Establishing these parks promotes the Chinese government’s eco-credentials and the benefits of its “ecological civilization” policies. It enables tourists to marvel at the national parks’ beauty and find joy in Tibet’s “pristine” nature. But we must continue questioning who and what purpose this constructed landscape is meant to serve and whom it dispossesses.

China plans to create a unified park system like the United States’ National Park Service. Those parks inspire millions of visitors each year. But the most famous of them, iconic parks such as Yosemite, Yellowstone, and Glacier National Parks, were also established through indigenous dispossession from the 1870s to the 1930s. There are now movements to re-establish indigenous rights in these parks.

China does not have to follow the United States’ example, but in both cases, the logic of colonization seems to trump both ecological and human-rights considerations.

Previous Post Invitation for the 3rd Young Indian Research Scholars’ Conference on Tibetan Studies Next Post Border Villages in Tibet: Why India Should be Wary of China’s New ‘Eyes and Ears’ in Himalaya
Menu