July 29, 2020Dechen Palmo
China’s dam-building threatens to choke off the flow of one of India’s most important rivers 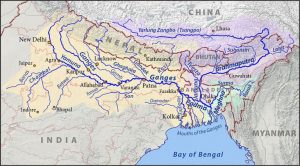 The Brahmaputra River runs from its origin in western Tibet through India before flowing into the sea in Bangladesh. Photo: Pfly / WikiCommons

Both the 12th and 13th Five-Year Plans adopted by the Chinese State Council have called for large-scale expansion of hydropower projects in the southwest, including all three provinces of Tibet. The Yarlung Tsangpo (Brahmaputra River) is one of the main international rivers identified for hydropower expansion in Tibet.

This is the second large hydropower dam after the Zangmu to be built on the mainstream of the Yarlung Tsangpo. 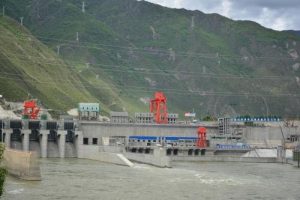 According to the China Society for Hydropower Engineering, Tibet’s Jiacha Hydropower Station was successfully gated to store water this month. It has also been reported that the Jiacha station will put into operation the first of its scheduled three units in August. At present, the installation and commissioning of the generator are reportedly in place and fully functioning.

The dam has three units and their cumulative installed capacity will reach 360 megawatts. It is expected that the annual power generation will be 1.704 billion kilowatt-hours.

The Jiacha (Gacha) Hydropower Station is located in Gyatsa county of the Tibet Autonomous Region on the middle reaches on the Yarlung Tsangpo.

Construction of Jiacha Dam was begun in December 2015 by Huaneng Tibet Power Generation Company Ltd (HTPG), a subsidiary of the state-owned China Huaneng Group. This 100-meter-level gravity dam has successfully closed the gates to store water, marking the completion of the main project of the dam.

It is reported that once the dam is put into operation in August, the project will transmit its power jointly with the Zangmu Hydropower Station, which will supposedly solve the problem of power shortages in Tibet.

The Brahmaputra River flows for more than 3,000 kilometers through Tibet, India and Bangladesh on its journey from the Himalayas to the Bay of Bengal. It is of great importance to India for three reasons. 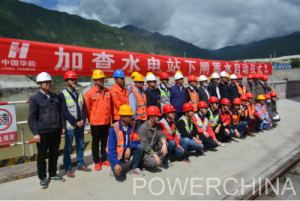 First, in terms of its ecological significance for India, its basin is shared by Arunachal Pradesh (41.9%), Assam (36.3%), Meghalaya (6.1%), Nagaland (5.6%), Sikkim (3.8%) and West Bengal (6.3%). The Brahmaputra basin belongs to the Indo-Burma biodiversity hotspot, one of the 12 hotspots of mega biodiversity on Earth recognized by the World Conservation Union (IUCN).

Its unique physiographic and climatic provide unique habitats for a variety of flora and fauna, including many endangered species. The basin is reported to have about 7,233 animal species that include 195 species of mammals, 607 of birds, 115 of reptiles, 54 of amphibians, 267 of fish, and 4,953 insect species. The plant resources of this region are enormous and represent the rich floristic wealth of India.

Second, the river is of great importance for the socio-economic life of the people in Arunachal Pradesh and Assam. The river valley is home to many tribal communities that are dependent on the river for their livelihoods.

Likewise in Assam, people and communities in 22 of its districts use the river to sustain their livelihoods in the raising of cattle, fishing, and cultivation of different types of crops, irrigation, and riverine transport. Approximately 59%, 18%, 13%, and 4% of the surveyed households depend on the river for agriculture, fishing, transportation of men and material, and log collection respectively.

Finally, the damming of the Yarlung Tsangpo is not only a question of environmental and socio-economic issues but also of politics. The river is of great importance in the present-day geopolitical context since it is also linked to Sino-Indian border disputes.

The two countries have contested claims in disputed areas called South Tibet in China and Arunachal Pradesh in India, which now controls the area. The disputed area occupies about an area of 90,000 square kilometers and has a population of more than 1 million.

Now with the second dam being built on the Brahmaputra, India, which recently had a deadly conflict with China in Galwan Valley, has to face a choice: either to oppose or block the construction of this dam through militarily intervention or to allow China to continue its dam-building, which threatens to choke off the flow of one of India’s most important rivers.

Therefore, the consequences of the direction the future of the Brahmaputra River moves toward will reverberate in the political, social, and environmental corridors of India’s and China’s foreign policies.

Previous Post Tibet and Provincial-level leadership Transfer: An Analysis Next Post Reverberating through time: Ama Adhe and the Women Warriors of Tibet
Menu