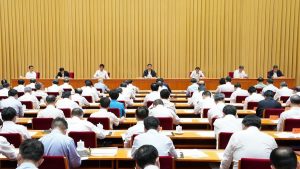 The Central Committee of the Chinese Communist Party (CCP) has convened its Seventh Tibet Work Forum for two days in Beijing from August 28 to 29. As the number suggest six forums have been previously held since the beginning of reform era. However, this doesn’t mean that no policy implementation organ of this sort has existed during the Party’s nascent administration in Tibet. During its initial years, the Party leadership has formed a working committee on Tibet where all the major policy decisions were formulated and put into implementation.

The Tibet Work Forum (TWF) or as it properly called the National Forum on Work in Tibet (ཀྲུང་དབྱང་བོད་ཀྱི་ལས་དོན་སྐོར་གྱི་བཞུགས་མོལ་ཚོགས་འདུ།) has become the main policy organ for Tibet since it was first started in March 1980 under the leadership of Hu Yaobang, then General Secretary of the CCP. The TWFs have been attended by the top leaders from the Party, Government and military organs. More precisely the TWFs have been chaired by the General Secretary of the CCP, which reflects the significance of the Party’s policy formulation on Tibet.

Since the Fifth TWF, Beijing has made a decision to include all the Tibetan inhabited areas in the Chinese provinces of Qinghai, Sichuan, Yunnan and Gansu into the larger framework of the TWF, which Tibetans in exile have considered a major shift in the China’s Tibet policy. The decision surrounding the policy shift could be attributed to the 2008 protests that spread across the Tibetan Plateau.

Unlike the previous five forums, the Sixth and the Seventh forums took place in the month of August under the leadership of Xi Jinping. Here we can’t ignore the timing that these two forums were summoned right after the Beidaihe summit, a highly-secretive annual gathering of the Party elders and the current Party leaders at a seaside resort in Hubei province where they engage in horse-trading and other important issues concerning domestic and foreign policies. The timing indicates the significance of Tibet in Xi’s vision of ‘China dream’, a grand vision that is predicated on the principle of rejuvenation and primacy of China.

We can’t ignore at the same time a theory that claims the Seventh TWF was not solely intended for Tibet, rather it was used as a pretext to highlight the geo-strategic importance of Tibet in China’s foreign policy vis-à-vis India. This make sense given the recent visit of Chinese State Councilor and Foreign Minister Wang Yi to Tibet Autonomous Region (TAR), including a trip to the disputed border with India. Though the name of the border area was not mentioned, a propaganda photo in which he was seen sitting with a Tibetan couple in traditional Lhoka attire somehow indicates that he has visited Tsona county in Lhoka prefectural city which shares the border with Tawang in Arunachal Pradesh. His visit was seen as rare and unusual since Tibet related inspection and assessments are usually conducted by the Chinese People’s Political Consultative Conference (CPPCC) and the United Front Work Department (UFWD). At the same time, his visit strongly echoed Xi’s strategic thinking of governance based on the secure borders and stability in Tibet (རྒྱལ་ཁབ་སྐྱོང་བར་སྔོན་ལ་མཐའ་མཚམས་སྐྱོང་དགོས་པ་དང་། མཐའ་མཚམས་སྐྱོང་བར་སྔོན་ལ་ངེས་པང་དུ་བོད་བརྟན་ལྷིང་དགོས་པ།).

Furthermore, Ding Yexian (Ch), deputy secretary of the TAR Party Committee who oversees the stability maintenance in TAR, is still seen in Lhasa despite his official transfer announcement in early July. It has now become clear that Beijing withhold his transfer for couple of reasons. First, Ding was needed in the TAR during Wang Yi’s visit to formally show him around how stability maintenance measures are being implemented. Ding was also seen accompanying Gyaltsen Norbu, China’s handpicked 11th Panchen Lama, during the latter’s visit to TAR (link in Tibetan) from end of July to mid-August. Second and more importantly, the TAR Party leadership needed Ding’s expertise in the field of stability maintenance and development to lay the groundwork for the Seventh TWF.

We could also argue in the same manner that Wang Yang, a member of the Standing Committee of the Politburo and the Chairman of the CPPCC, visited TAR in early July compounded by the visit of the Politburo member and Vice Premier Hu Chunhua to the TAR in early August to assesses the poverty alleviation had largely paved the way for the Party leadership in laying the groundwork for the Seventh TWF.

The latest forum laid down the “ten must” that are designed for the Party’s strategy of governing Tibet in the new era, at least, for the next five years. However, some guidelines outlined in the “ten must” need a deeper look given its far-reaching impact. Xi Jinping issued a similar guideline in 2018 that demands religious personnel in Tibet to uphold the “four must” to make them patriotic, party loving, law-abiding and influential.

Though this is not a new development but the debate surrounding an overhaul in the system of regional autonomy, the nucleus of China’s minority policy, in a recent academic discourse on nationality in China has been further downplayed by Xi Jinping in his speech given at the Seventh TWF. Xi said, “Practice has fully proved that the Party Central Committee’s policies on Tibet work are completely correct, and that Tibet’s sustained, stable and rapid development is an important contribution to the overall work of the party and the country.” In fact, Xi made a similar statement at the Central National Work Conference held in September 2014 as well as at the Sixth TWF held in August 2015.

Beijing’s lack of interest for a change in its Tibet policy could be linked to deeply entrenched vested interest of millions of officials associated with anti-splittism bureaucracy at every level, the UFWD for instance. We could bring here the argument put forward by Beijing-based Tibetan writer Tsering Woeser to shed some light on this view. Woeser writes, “These officials are all eating minzu rice. If ethnic policies are adjusted or changed, this will have a big impact on their interests, and thus they will attempt to block any adjustment to ethnic policies”.

Similarly, thousands of middle ranking Chinese cadres formally called Aid Tibet Cadres (ATC) from inland provinces who are assigned senior political positions in the TAR-level Party and Government departments under the Aid Tibet Program (ATP) would certainly resist any change in Tibet policy. The reason behind is this. Since its launch in 1994 at the Third TWF, the ATP has linked the entire TAR to China in terms of infrastructure building and development projects. This involves a large amount of money invested by the assisting provinces, central ministries and state-owned enterprises. These powerful stakeholders monitor their projects through ATCs who receive quick promotion, which is usually not the case if they are not assigned to work in the TAR. Wu Yingjie is an ATC who eventually became the top honcho of the TAR is a perfect case in point. This way the ATP has become a sort of career advancement platform for the ATCs and moneymaking machine for other stakeholders.

Another development worth highlighting in the context of ongoing mass re-education campaign in Tibet is Xi’s strong emphasis on the work pertaining to ideological indoctrination in schools at the Seventh TWF. Xi said, “We must attach importance to strengthening ideological and political education in schools, put the spirit of patriotism throughout the entire process of school education at all levels and types, sow the seeds of loving China in the depths of the hears of every teenager”. In other words, there has been a growing sense of insecurity within the Chinese establishment concerning the younger generation Tibetans taking part in every aspect of Tibetan freedom struggle. With regard to this Beijing’s decision to return to re-education rather than solely relying on the securitization in Tibet is perceived as a long-term solution to ensure long-term stability (ཡུན་རིང་བདེ་འཁོད།) in Tibet.

In a similar vein, Xi emphasizes in his “ten must” the importance of unity between nationalities and also arguably promotes the idea of intermarriage between Tibetan and Chinese. The policy of incentive-based intermarriage between Chinese and religious minorities like Tibetans and Uighurs was first promoted through a symposium held in Lhasa, the capital city of the Tibet, in 2014. Chen Quanguo, former party secretary of the TAR, stressed at the symposium that “to promote fraternal ethnic intermarriage as an important starting point to promote the great unity of all ethnic groups in Tibet.” Chen even used a Tibetan proverb Love each other like tea and salt to portray the intermarriage in the context of social phenomenon. It can be, however, interpret in a simple and convincing way. What happens if you add salt to tea? The tea tastes a little salty, but you don’t see salt anymore. The salt dissolves in the tea. This apparently is an act of Tibetans “fusion” and “mingling” into Chinese. According to an official report cited in the Washington Post, mixed marriages in Tibet have increased annually by double-digit percentages for the past five years, from 666 couples in 2008 to 4795 couples in 2013, possibly indicating some degree of urgency of this policy.

My final impression is that Beijing doesn’t felt the need to exhibit some kind of Tibetan participation in the Seventh TWF, at least, their chosen 11th Panchen Lama. But for the sake of representation, Pema Thinley, Vice Chairman of the National People’s Congress who has previously served in a various important positions in the TAR, including its deputy Party Secretary was apparently the only Tibetan included.

Previous Post Tibet in Sino-India Relations: A Six Decades of Miscalculation and the Heavy Cost Next Post TPI launches its latest research collection: ‘Lockdown Ruminations: Reflections on Tibet in times of COVID-19’
Menu