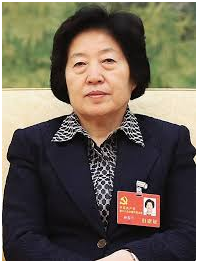 Sun Chunlan, one of the two-female members of the current 25-member Politburo was appointed head of the United Front Work Department (UFWD) after a widely anticipated purge of Ling Jihua. The UFWD is an agency under the command of the Chinese Communist Party which looks after the non-Communist Party entities and oversees issues concerning ethnic minorities.

The UFWD has been a stepping stone for Chinese leaders to achieve higher positions. But in the case of Ling and Sun, it was just the opposite.

Ling was in charge of the General Office which looks after day-to-day affairs of the party leaders and a preferred candidate of Hu Jintao in the Politburo of the 18th Party Congress. Sun was party secretary of Fujian province and Tianjin (one of the four centrally administered municipalities) and a member of the Politburo. The observable fact between the two had been that both were protégés of Hu Jintao.

Sun’s demotion came in an unexpected manner. Sun was neither targeted in the corruption probe like Zhou Yonkang and Ling Jihua, nor poses a serious threat to Xi Jinping’s authority as she is reaching her retirement age. Then what could be the obvious reason behind her demotion? The fact that officials convicted of corruption and abuse of power in the ongoing anti-corruption campaign has been largely connected with Jiang Zemin and Hu Jintao. Perhaps her fault was her connection with Hu.

We also can’t rule out what professor Bo Zhiyue predicts. He says that “Sun is being groomed for a more important leadership role in the near future,” (http://thediplomat.com/2015/01/will-china-have-its-first-female-poliburo-standing-committee-member).

This writer would like to focus on Sun’s background. Sun started her career largely through the Chinese Communist Youth League, which was once headed by Hu Jintao. Sun has a strong economic background with a part time MBA degree from Liaoning University. In her journey from the grassroots to the Politburo, there has been no record of Sun’s association with minority issues, particularly Tibet.

Although Sun is a newcomer to the UFWD, I think she would be wise enough to seek guidance from her female colleague Liu Yandong.  Liu has been well-known for Tibet affairs among her colleagues in the Politburo. Notably, some of the most productive rounds of Sino-Tibetan negotiations took place while she was the head of the UFWD from 2002-2007.

Sun’s appointment fell on the eve of New Year. Let’s take that as positive step from Xi Jinping’s administration.