One of India’s foremost security analysts and China experts, Jayadeva Ranade spoke to the staff of the Central Tibetan Administration on the topic, “The Prospect of Re-setting the India-China Relationship” at the Nyatri Hall on Wednesday. 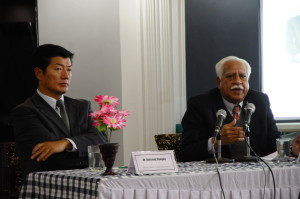 Sikyong Dr Lobsang Sangay listens as Mr Jayadeva Ranade speaks to the staff of the Central Tibetan Administration at the Nyatri Hall in Dharamshala on April 8, 2015

Sikyong Dr Lobsang Sangay, who moderated the session, extolled Mr Ranade for his detailed and meticulous research work while acknowledging his contribution in keeping the fire for Tibet burning in the corridors of Delhi.

Mr Ranade began by giving a grand overview on the major changes that has shaped China following the Bo Xilai episode and the 18th Chinese Communist Party Congress in 2012 during which President Xi Jinping took over all three top posts in China.

He pointed out that the fall of the all-powerful former party chief of Chongqing, Bo Xilai, opened up the cracks in the Chinese system, proving that China’s centres of power – the communist party, the People’s Liberation Army and the vast security apparatus – were not as impervious to penetration as earlier thought.  Following the debacle, Mr Ranade noted that there was a definitive hardening of stance within the core leadership of the Party, which in-effect led to the strengthening of the Party grip and the emergence of Xi Jinping as China’s most powerful man since Mao Tsetung.

Mr Ranade observed that the coming to power of a reputedly decisive and bold Indian Prime Minister Narendra Modi, with a resounding mandate, and his policy of laying out geographic parametres with frequent visits to India’s neighbouring countries has in fact fast tracked the resetting of India-China relationship.

Rubbishing earlier reports suggesting Xi’s lack of control over the PLA during the intense military stand-off between India and China in the Chumar region of Ladakh last year, while Xi was on a state visit to India, Mr Ranade pointed out that this January, all three concerned PLA commanders of the areas neighbouring Ladakh, Chumar and Depasang regions in Tibet were promoted to the rank of major general.

Commenting on PM Modi’s visit to China next month, Mr Ranade said that while both the leaders will not offer any territorial compromises, the talk on the border issue will most likely focus on fixing a line which the troops of the two courtiers will not cross thus making an effort to resolve the problem of frequent intrusions. 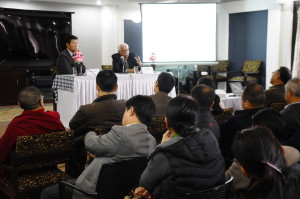 In response to a question, Mr Ranade stated that the present Chinese structure cannot continue for much longer as pressure resulting from the massive social and economic changes in China and the ongoing process of rectification within the PLA and the Party will force reforms.

Answering a question on the issue of Tibet, Mr Ranade took note of China’s frustration over Tibet, which he said is becoming more and more evident with their continued failure in tackling issues such as the self-immolation protests. The former Additional Secretary in the Cabinet Secretariat assured the audience of the sympathy and support that Tibet enjoys among the Indian masses as well at various levels in the government.

The talk was organised by the Tibet Policy Institute, a research centre of the Central Tibetan Administration.