Was it a coincidence?  Just the day before the new stand-off between the Indian and Chinese defence forces in Ladakh started, a senior member of the Chinese Central Military Commission visited the region.
Let us look at the facts.

As it already happened before the visit of Premier Li Keqiang to India in April/May 2013 and also as President Xi Jinping arrived in Ahmedabad in September 2014, the Chinese People’s Liberation Army (PLA) intruded on India’s territory. The face-off is currently happening in Burtse area, a few miles east of Daulat Beg Oldie (DBO), where the 2013 confrontation occurred.
According to The Times of India, “the bone of contention is a surveillance structure being erected by the PLA very close to the Line of Actual Control (LAC).” The Indo-Tibetan Border Police apparently objected to the construction of the structure and, with the help of the Army, stopped the PLA. Subsequently, the PLA called for reinforcements, followed by a massing of more Indian forces in the area.  The Times of India said: “The two forces are still locked in an eyeball-to-eyeball confrontation and efforts are being made to defuse the situation.” 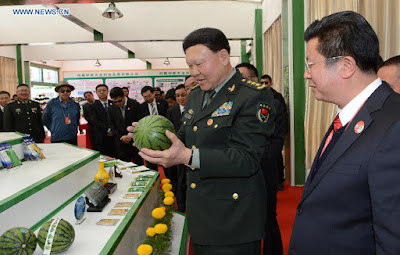 The Coincidence
On September 9 and 10, a member of the all-powerful Central Military Commission visited Ngari Prefecture, which borders Ladakh, in Western Tibet. General Zhang Yang was in Tibet to ‘celebrate’ the 50th anniversary of the creation of the Tibetan Autonomous Region. At the end of the main function held in Lhasa, the ‘Central’ delegation divided itself into different groups. As mentioned in a previous post, Yu Zhengsheng went to Shigatse and visited the Tashilhunpo.

General Zhang Yang headed for a two-day tour of Ngari Prefecture. He went to convey the ‘loving care’ and the ‘deep feeling’ of the CPC Central Committee, the State Council, and the Military Commission to the ‘cadres and masses of all nationalities’.
Note that ‘of all nationalities’, just means ‘Tibetans’. Like his colleagues, General Zhang brought along a banner carrying President Xi’s words, ‘Strengthen National Unity and Construct a Beautiful Tibet’.[Source]