The Bells of Shangri-la is a tribute to the intrepid and determined scholars, explorers, diplomats and spies who put Tibet on the world map
Thubten Samphel, Hindustan Times, Jun 22, 2019 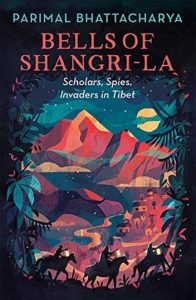 The 18th, 19th and early 20th centuries were the age of exploration and discovery. It was a time when the West ‘discovered’ the unknown world. ‘Dark Africa’ was mapped. So were the two poles. But the largest, unknown and unexplored space on the face of the Earth was Tibet, the world’s largest and highest plateau, the Roof of the World and the source of Asia’s six mighty rivers and these days the Earth’s Third Pole. Bells of Shangri-la is a tribute to the intrepid and determined scholars, explorers, diplomats and spies who put Tibet on the world’s map.

There was a great rush. Tibet, the great unknown in the age of discovery and exploration, served as a magnet. The curiosity by the West about Tibet was whetted by rumours about Shambala, a kingdom surrounded by mountains, a realm of peace and purity, unsullied by greed. In between the two world wars, Shambala was transformed into Shangri-la, a place of eternal youth. The mapping of Tibet in the imagination of the West was richer, more detailed and substantial than its attempt to map physical Tibet.

Enter Alexander Csoma de Koros. He wanted to enter Tibet because he believed the origin of the Hungarian people was either in Tibet or in the rolling steppes of Mongolia. Instead, he, a multi-linguist and the father of Tibetology, introduced the land’s spiritual richness to the world. He compiled the first English-Tibetan dictionary and is buried in Darjeeling. He is considered by Japan’s Tibet scholars as a manifestation of Boddhisattava, the Buddha of infinite compassion.

Later, Germany joined in the race. In 1938 and 1939, before the start of the Second World War, a Nazi expedition was launched into Tibet to establish the origin of the Aryan race. The belief that the origin of the master race was in Tibet was based on the fact that Tibetans used the swastika or its reverse in ceremonies. The team measured Tibetan skulls and height and noted the colour of their hair. Luckily, they dismissed the notion of any connection between the Tibetans and the world’s master race.

The Bells of Shangri-la conjures the world of the Great Game played out between British India and Czarist Russia in a contest to stamp out each other’s influence in Central Asian, from Persia to Tibet. In this context, Parimal Bhattacharya brings alive two remarkable characters, a great Bengali scholar of Tibet and a humble Sikkimese tailor, who both went on clandestine missions to Tibet to collect information about the country. Sarat Chandra Das added to the work of Csoma de Koros and introduced Tibet to the scholarly world. Kinthup, unlettered but firm of purpose and solid as a rock, established that the Brahmaputra and the Yarlung Tsangpo which originate in the region of Mount Kailash in western Tibet were one and the same river.

In recounting the adventures of Sarat Chandra Das and Kinthup in Tibet, Bhattacharya is following in the tradition of Kim, Rudyard Kipling’s classic novel on the Great Game. In The Myth of Shangri-la, Peter Bishop says, “One of the final and most complete embodiment of Tibet as a sacred place in the Western imagination was the utopia of Shangri-la described in James Hilton’s famous 1933 novel, Lost Horizon.” So great was the Western world’s fascination with Tibet that Arthur Conan Doyle was forced on public demand to resurrect Sherlock Holmes after his untimely death at a waterfall in Switzerland. Conan Doyle made the world’s most famous fictional detective reincarnate or reappear in Tibet and meet the grand lama. Jamyang Norbu’s The Mandala of Sherlock Holmes recounts in riveting and uplifting detail what the great detective did in remote Tibet.

Bells of Shangri-la is a fine effort to re-create the world of Western exploration of Tibet and the Great Game. The characters who peopled this age and who, by their sacrifice, courage and enduring stamina, made it memorable and inspirational are described in minute detail. This is a welcome new contribution to the rich literature of this heroic age.

There are some jarring notes and typos. Tibetan nuns are identified as “woman monks.” Dorje Phagmo, the abbess of Samding Gompa, reincarnates as Dorje Phagma. But these editing slips do not distract the reader from Bells of Shangri-la’s contribution to re-create the milieu of the Great Game and heroic characters who peopled the age. A new Great Game is being played out at India’s doorsteps. China’s Belt and Road Initiative is a 21st century manifestation of the Great Game. Bells of Shangri-la informs readers how the original Great Game was played, which might help coming generations of Indians understand how to play the new Great Game.