The Underlying Politics of Poverty Alleviation in Tibet

Trainings and relocations of Tibetan nomads and farmers are aimed more at political stability than poverty alleviation. 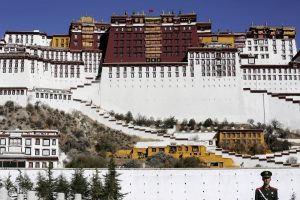 Recently, Chinese authorities declared a “major victory” in poverty alleviation in Tibet. It is imperative to assess how the anti-poverty campaign has been carried out, in view of the recent reports of Xinjiang-like coercive labor trainings being implemented in the region.

As a poverty alleviation strategy, Beijing has launched the so called “labor train and transfer” program in Tibet, mainly targeting Tibetan nomads and farmers. According to Chinese authorities, this training, like ones in Xinjiang, helps Tibetan herders and farmers to learn new skills such as cooking, mining, and others to earn money. However, the issue with this seemingly benign policy is how it is being carried out and the likely long-term negative consequences.

On the surface, there is nothing malign about a state lifting people out of poverty – indeed, it deserves applause. However, when it is done with a different political motive, then it becomes a problem. And this appears to be the case with the China-led anti-poverty campaign in Tibet. There are overwhelming political and security contours like ideological education and stability maintenance.

One of the primary repertoires of labor training begins with thought education, which Beijing claims is necessary to remove what it calls the “negative influence of religion” and rectify backward thoughts. Among other things, this entails disregarding Tibetan spiritual civilization in exchange for a money-is-everything-culture. The premise is that Tibetans are poor because their culture is backward and in order them to advance materially, they have to embrace the Chinese culture and system. This typical colonial civilizing mission is being carried out by an army of Communist Party cadres and security agents, including the People’s Liberation Army (PLA).

The official logic for including the military in the labor training is that it will enhance discipline and instill patriotism among the masses. This is done under the supervision of the local PLA garrisons and the People’s Armed Police. The involvement of security agencies in the labor training indicates that the political aspects of the program override the economic or social dimensions. In a Foucauldian sense, the goal is to create disciplined or docile productive workers and/or loyal colonial subjects.

Another strategy of the campaign has been to remove predominantly Tibetan nomads and also farmers from their ancestral lands and put them in relocation sites – ostensibly to resettle them in a better living conditions. According to China, about 266,000 nomads and farmers have been transferred into 960 new relocation areas. Nevertheless, putting aside the official narratives, the Tibetan nomads and farmers who have been relocated into these camps have to leave behind not only their lands but also their livelihood and way of life.

Besides, they have to operate in a system that operates under unfamiliar conditions. Their survival skills as Tibetan nomads or farmers will not help them in a market whose norms and praxes, including laws and language, are dominated by Chinese preponderances and preferences. However, their challenges do not end here.

Once they are transferred into different relocation areas, they are subjected to different political classes and surveillances. All the relocation sites have CCP members called residential work teams who collect and compile dossier on people including income, views on politics, and religion to determine their political trustworthiness.

This goes along with political education, which includes Beijing’s policies on religion, ethnic, anti-separatism, and gratitude education. The residential work teams give ideological education to large groups as well small target groups. For instance, just in one relocation camp in Toklongdechen district near Lhasa, Chinese sources reported that the work teams carried out 2,213 sessions on general political education and 1,063 anti-separatism sessions in 2018. Paralleling ideological education is a sophisticated surveillance system to monitor thought and behavior.

The new relocation structures housing the displaced nomads and farmers are also panoptic in design and purpose, with a systemic surveillance apparatus. After their relocation, all the households are organized into a grid management system in which 10 to 15 families are put under each grid. They have to report on each other, including their problems as well as views, to a CCP official who is in charge of the grid segment. This collective neighborhood policing is further bolstered by high-tech surveillance system with AI-powered facial recognition cameras.

As result, these relocation camps are more controlled than comfortable; they are more automatic than autonomous. More than solving the problem of poverty, they are anchored toward the problem of political instability. Likewise, the displacement of nomads and farmers from their ancestral lands to be trained in low-skill jobs is more than educating, it is meant to Sinicize them – and therefore the end result is less than empowering. It renders them more vulnerable to different contingencies, including different forms of exploitation and deprivation.

*Palden Sonam is a visiting fellow at Tibet Policy Institute based in Dharamsala, India, researching China’s domestic politics and China’s policy toward minority regions. The article was originally published in The Diplomat on 09 January 2021.