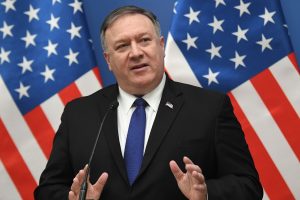 With the U.S. State Department announcing its new visa restrictions on Tuesday against Chinese officials involved in restricting American citizens and officials from entering Tibetan areas, their disagreement on the Tibet issue has yet again captured the spotlight. The retaliatory move under the Reciprocal Access to Tibet Act of 2018 is a part of recent wave of decisions by the U.S. government that has resulted in sanctions and restrictions against the Chinese government and its officials over the last several years, most recently in reaction against Beijing’s crackdown against protesters in Hong Kong, according to Lara Jakes of the New York Times. Beijing immediately retaliated by imposing similar restrictions on U.S. officials involved in “egregious conduct related to Tibet issue”.

These tit-for-tat moves over their normative differences, reflected in the new visa restrictions, can be interpreted and defined in a real politik manner, something that has been represented only implicitly. Therefore, the Tibet issue in sense, has also been confined and limited within the normative framework, especially in U.S. – China relations. However, the geopolitical relations between great powers is rarely defined by norms but by rather hard politics. Due to the nature of this relationship, the two nations, over the past year have been involved in a tat-for-tat relationship vis-a-vis their economic and political relationship. The Reciprocal Access to Tibet Act of 2018 is one such measure while the recent statement by the U.S. Secretary of State Mike Pompeo highlights both the increasing curtailing of freedom of speech and press in China as well as the U.S.’ stand on the issue.

While Beijing has constantly obstructed travel for U.S. diplomats and citizens into Tibetan areas on grounds that “China only imposed restrictions based on geographical and climatic conditions”. On the other hand, the Chinese officials and the citizens enjoy far greater access to the United States. Although the U.S. Secretary of State Mike Pompeo did not reveal who and how many of the Chinese officials would be held accountable, this will nevertheless add to the increasing rift between the U.S. and China. The widening of the rift have led some observers to believe that the two nations are entering a new Cold War era. The Chinese Foreign Minister Wang Yi has even said that the relations between China and the United States are facing the most serious challenges since the establishment of diplomatic ties in 1979.

American interest in Tibet stems from ‘fascination’ to geopolitical and ideological considerations to the current and continuing activities in raising Tibet’s profile internationally. This has prompted various U.S. lawmakers, congressmen and senators to extend their support for Tibet’s cause. From 2010 to 2020, there have been 19 bills, resolutions and law sponsored by various stakeholders in U.S. constituencies on Tibet with the latest bill (H.R. 6948), introduced by US Congressman Scott Perry, calling onto “authorize the President to recognize the Tibet Autonomous Region of the People’s Republic of China as a separate, independent country”. Most of the U.S. legislative measures, including the Tibetan Policy Act of 2002 (TPA) and the Reciprocal Access to Tibet Act that was signed by President Donald Trump into law, resonate United States’ rhetoric on Tibet, which is to support the aspirations of the Tibetan people to safeguard their distinct identity.

Amid rising tensions between the U.S. and China, with their relations taking a steep downturn, especially after the outbreak of the COVID-19 pandemic, the U.S. has intensify its criticism of China’s handling of issues concerning Xinjiang, Tibet, Hong Kong, and Taiwan. Beijing in reaction has repeatedly warned Washington against meddling in its internal affairs. The Secretary of State earlier singled out China, together with Iran, as the worst place in the world for those belonging to a minority religion, for treating religious minorities as national security threats that require surveillance, imprisonment and sometimes death. The United States Commission on International Religious Freedom (USCIRF) also documented China’s abuses against Christians, Uighur Muslims, Tibetan Buddhists, Falun Gong practitioners and others in its 2019 Annual Report, calling the State Department to designate China as a country of ‘particular concern’ for its systematic violations of religious freedom since 1999. The U.S. has also condemned the new national security law imposed in Hong Kong and shown concern over the escalating protest against the Chinese government.

In his statement, Mike Pompeo noted the United States remained “committed to supporting meaningful autonomy for Tibetans, respect for their fundamental and unalienable human rights, and the preservation of their unique religious, cultural and linguistic identity.” He further stated that international access to Tibet was a matter of regional and environmental security. Calling the Tibetan region as being increasingly vital to regional stability resonates with U.S. concerns that the geopolitical status quo in Asia is being challenged by China. China and U.S. are increasingly competing for global and regional influence particularly with the former attempting to alter the current global governance system, which it perceives as being western centric. Therefore, the recent developments such as the trade war, the visa ban on the Chinese officials, bandwagoning with the EU against ‘China threat’ etc needs to be analysed in view of these developments. The Reciprocal Access to Tibet Act is similarly a measure on the part of the U.S. to curtail China’s influence as well as assert its position in Asia.

Memories of the Past and Beijing’s Refusal to Remember