Border Villages in Tibet: Why India Should be Wary of China’s New ‘Eyes and Ears’ in Himalaya

The China-India military face-off in the Galwan Valley on June 15, 2020 was considered one of the deadliest military confrontations between the two nations since 1962. It has almost been one and half years since India lost the lives of around 20 soldiers in the Galwan Valley during that face-off. For the past few years, China has been creating a new strategic front to encircle India by building a chain of border defence villages along the Indo-Tibetan borders. Because of this, India may have to pay a heavy price in terms of its territorial integrity and national security. In the future, this could change the demographic pattern in the world’s highest frozen border — the Himalaya. 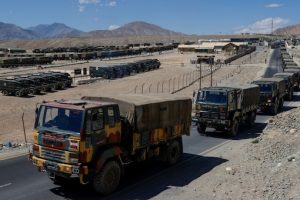 For the past few years, China has been creating a new strategic front to encircle India by building a chain of border defence villages along the Indo-Tibetan borders. (Representational Photo/Reuters)

By invading Tibet, China has forcefully shifted the traditional borders between India and Tibet into the Sino-Indian boundary. Since then, the two Asian giants have been engaged in more than thousands of border skirmishes. Despite India’s formal recognition of Tibet as a part of the People’s Republic of China on two occasions — 1954 under Prime Minister Jawaharlal Nehru, and 2004 under Prime Minister Atal Bihari Vajpayee — Chinese leaders have always suspected India’s role in the Tibetan movement. Apart from this, the Sino-Indian conflict over the Indo-Tibetan border remains as one of the longest geopolitical disputes in Asia. The centrality of Tibet is a key factor in resolving the China-India conflict.

When Xi Jinping became the President of China on March 14, 2013, he gave utmost importance to the domestic stability in Tibet and the safeguarding of its assumed frontiers. Subsequently, the Chinese authority has emphasised that “developments in Tibet are related to the overall work of the party and the country, and the focus of work in Tibet should be ‘safeguarding’ the motherland’s reunification and national unity”. By retaining China’s Tibet policy of safeguarding national unity and reunification, China has re-strengthened the importance of “maintaining the stability of Tibet” as the security and safeguard of the national interest during the 7th Tibet Work Forum in 2020.

For securing the stability of Tibet and its borders, China has built a chain of border defence villages across the Himalayan frontiers, which share borders with India, Nepal and Bhutan. These villages are a part of China’s veiled poverty alleviation programme to show the achievement of China’s development in Tibet and to secure the borders simultaneously. Building infrastructures and well-designed border villages in Tibet’s border regions are intrinsically linked to the dual-use infrastructure development, which serves as border watch-posts for monitoring cross-border migrations and occupying no-man’s land on the Himalayan frontiers. Both Professor Dawa Norbu and Claude Arpi have written on the dual-use of infrastructure development in Tibet. The good network of roads and railway lines gives easy access to China for the deployment of its military in Tibet’s border regions.

According to the so-called China’s Tibet Autonomous Region’s (TAR) work report in 2017, the Chinese government has launched the rural rejuvenation programmes in the name of “the construction of well-off villages and simultaneous relocation of Tibetans in these villages”. The relocation of people in Tibet’s frontiers and building border defence villages are also outcomes of the 19th Party Congress in October 2017, in which Xi Jinping called for “Chinese people with talent to work in remote and border areas with the ethnic minority population”.

In July 2017, the TAR issued the “Plan for the Construction of Well-off Villages in the Border Area of the Tibet Autonomous Region (2017-2020)”. It involved the building of 628 border villages in TAR’s 112 border towns across 21 border counties which are located in Shigatse, Lhokha, Nyingchi, and Ngari prefecture. China has built 354 well-off border villages in Lhokha which shares a border with the Indian state of Arunachal Pradesh and Bhutan. China claims that Arunachal Pradesh is an integral part of China. The construction of these villages could lay the groundwork for the future towns and cities in the bordering regions.

Jiang Jie, Executive Vice Chairman of TAR, presided over a special meeting in the Autonomous Region Strong Frontier Work Conference which was held in Yatung, Dromo County, Shigatse City, in December 2020 for inspecting the progress of the construction of the well-off border villages. The meeting noted that 94 percent of the project was completed by December 2020, and 93 percent of the allocated funds were used. As of now, China has completed the construction of 628 border defence villages.

The completion of these border defence villages would act as border watch-posts and become the ears and eyes of the People’s Liberation Army to expand and secure borders in the Himalaya. Strategically, building the first line of border defence villages helps China to reaffirm its claims over the disputed territories in the Himalayan regions, which Beijing for long claimed as the five fingers of Tibet.

The author is research fellow at the Tibet Policy Institute in Dharamshala. He holds a PhD in International Relations from the University of Madras. The views expressed in this article are those of the author and do not represent the stand of this publication.

Previous Post What Xi didn’t say about national parks on Tibetan Plateau Next Post Is Tibet Finally Going the Way of Xinjiang?
Menu